During their pilgrimage to Medjugorje in 1985, a nun and two pilgrims said they saw the then Cardinal Joseph Ratzinger in the village in Bosnia-Hercegovina, as reported by Journalist Jakob Marschner, of Copenhagen.

Adding credence to this report, Fr. Ante Juric, a priest from Croatia, currently pastor of St. Mary of the Assumption Croatian Catholic Parish, in San Jose, California, attested to the same news. Being familiar with many of the Franciscan priests in Medjugorje, he told me a couple days ago, on December 6th, 2010, that it is well-known among them that Cardinal Ratzinger visited Medjugorje, wearing civilian clothes, at least a couple of times. “Some of the Franciscans have definitely seen him there. You may quote me on this,” he said, adding emphatically, “It is the truth.”

Not only might the pope have traveled to Medjugorje more than once, but he may personally believe in the authenticity of the apparitions of the Virgin Mary there. On March 18th, 2010, the apostolic nuncio to Bosnia and Herzegovina, Archbishop Allessandro D’Errico, made an official statement about the pope’s intent behind the recently formed international commission for Medjugorje–a statement which can hardly be construed as anything but favorable:

[The] Holy Father is very much familiar with Medjugorje phenomenon; he even mentioned that to me personally. He is aware of huge amount of positive and good influence of local priests, religious, Franciscans, lay people, and therefore, it is very difficult for him to perceive that there can be so many opposing information about the same matter. That is why he wanted to establish this Commission that is on really high level. 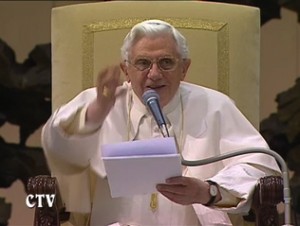 And most recently, during the General Audience, when the Pope greets pilgrims in their own language, who are visiting Rome, he smiled during his mention Medjugorje. At 12:25, Wednesday, December 1, 2010, when this picture was taken, he looked up from his notes, smiled and raised his right hand in response to the cheering of the Croatian audience members, as he addressed them with the following words:

“I am greeting all of the Croatian pilgrims from my heart, and especially those from the parish of St. James of Medjugorje. Your pilgrimage to Rome is part of the preparation for the coming of the Lord. Therefore, in hope, be evangelizers of God’s love in your nation. Praised be Jesus and Mary!”

Psychologically speaking, if the Pope were against Medjugorje and seeking to denounce it, as some people believe he is, Medjugorje would hardly elicit his smile and his blessing. There is no reason the pope would choose to single out pilgrims from Medjugorje, say that their pilgrimage is part of the preparation for the coming of the Lord, much less encourage them to evangelize, if he feared Medjugorje was an unholy place spreading errors across the globe. It would be virtually impossible for a man of integrity, such as the pope, to display such favorable gestures and words, if his heart were against, or even skeptical, of Medjugorje.