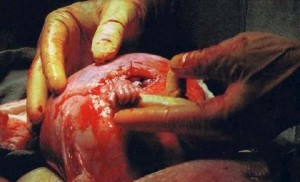 On August 19, 1999, the hand of 21-week-old Samuel Alexander Armas came out of him mother, Julia Armas’ womb, and the doctor gently touched it. Little Samuel underwent a successful fetal procedure to fix a spina bifida lesion.

Scroll to the bottom of this announcement to read Mary of Medjugorje’s words regarding abortion.

On January 11, 2011, former Planned Parenthood director and 2008 “employee of the year” Abby Johnson will FINALLY be able to reveal all the secrets from behind the closed doors of the abortion business … and why she left to join the pro-life movement.

After winning the legal battle against a massive Planned Parenthood lawsuit and restraining order — which was intended to silence her, Abby is finally able to blow the whistle on her former employer and reveal ALL the shocking details of her conversion.

Abby’s entire story has never been revealed publicly until now.

On Tuesday, January 11, Abby’s story will be released to the world in a landmark book, UNPLANNED, published jointly by Tyndale House, Focus on the Family, and Ignatius Press.

One night before this, on Monday, January 10, at 9 PM Eastern (8 PM Central, 7 PM Mountain, 6 PM Pacific) — YOU are invited to join Abby for a live webcast “sneak preview” of the no-holds-barred revelations which fill the pages of her book.

Join this FREE online event at:

During the webcast, you will discover …

* The hidden personal secret that Abby had kept buried for years

This promises to be an eye-opening webcast. The announcement about this event is being sent to hundreds of thousands of people around the world, and there is limited space available.

To grab your spot before the webcast is filled up, register to attend NOW, before it’s too late:

P.S.- When you register for the webcast, they’ll also send you the first chapter of Abby’s breakthrough book — for FREE! You’ll be among the very first to peek inside the pages of the book the abortion industry tried to stop. Get chapter one now at:

The following is cited from a newsletter written by Sr. Emmanuel, regarding Mary of Medjugore and abortion:

The Gospa never gave a public message concerning abortion. But in the 80’s she educated the youth of the prayer group on this matter. Here is what I gathered from it:

The Blessed Mother recommended to all not to judge these mothers, but to pray so that such mothers would no longer exist. She asked these young to do whatever is in their power to help these mothers to reconcile with God through Confession, and act towards them with much love and discretion. She also told Mirjana, “Abortion is a great sin, for it is killing a human being. God who is good forgives all the sins, but for this sin in particular He asks a great penance from the father and the mother of the child.”