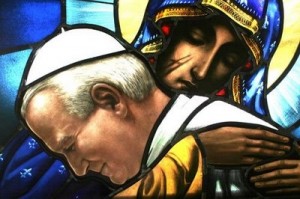 It is well known that Pope John Paul II carried a great fondness in his heart for Mary of Medjugorje and wanted the pilgrimage site protected. He made many personal statements giving his wholehearted approval and support of the apparitions there. “If I weren’t pope,” he said, “I’d be in Medjugorje already!” as reported April 29, 1989, by Bishop Paul Hnilica, S.J., Auxiliary Bishop of Rome, after having been admonished by the Holy Father for not stopping in Medjugorje on his return trip to Rome. To Monsignor Maurillo Kreiger, former bishop of Florianopolis in Brazil, the pope said, “Medjugorje, Medjugorje, it’s the spiritual heart of the world.”

The Vatican recently announced on January 14th, 2011, that the beloved Pope John Paul II (+2005), will be beatified May 1, after Pope Benedict XVI’s approval of the needed miracle attributed to his intercession, involving a Polish nun miraculously recovering from Parkinson’s disease.1

[When Karol Wojtyla was first elected] The visionary Marija asked Our Lady about the newly elected Pope (John Paul). She revealed to Marija that he was Her Pope, and that it was very difficult for him to have been elected. This is very amazing when one considers that after Pope Paul VI died, Pope John Paul I was elected and within 30 days he died!… and then Pope John Paul II was elected!

For this time, we had a man in the flesh elected to spiritually rule all Christians and people of the world, anointed and, by divine intervention, saved to assist the Queen of Heaven during the ushering in of a new time. Our Lady’s words to the world confirms this clearly, when Pope John Paul II was to visit Zagreb, speaking of the Pope:

On November 8, 1981, Our Lady appeared in an apparition, kissing and lovingly embracing a picture of John Paul II.

“He is your father,” she said, “the spiritual father of all. It is necessary to pray for him.”

And on May 13, 1982 Our Lady of Medjugorje said, concerning the assassination attempt on the life of John Paul II:

“His enemies have wanted to kill him, but I protected him.”

All of the visionaries of Medjugorje have had the opportunity to meet Pope John Paul II, with the exception of Ivan. In 2005, Ivan expressed his disappointment in talk he gave, over not having been able to see the Pope before his death. However, Medjugorje visionary Ivan had the following apparition, as reported on April 2, 2005, the same day the pope died:

At Ivan’s apparition tonight, Ivan was recommending intentions to Our Lady when Pope John Paul II appeared on Her right. He was smiling, young, and very happy, all in white with a long gold cape. Our Lady turned, smiling, to look at the Pope, and he was looking at Our Lady, smiling. Our Lady then said to Ivan:

Our Lady in Medjugorje revealed Pope John Paul’s place in Heaven, five years before it was publicly declared.