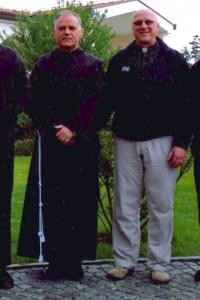 I traveled to Medjugorje, when I was invited by a tour operator to serve as the spiritual director and priest for a pilgrimage group. I felt truly excited to be there, in a place where one could easily feel the Blessed Mother’s presence. I had read about miraculous things pilgrims had experienced in Medjugorje, such as rosaries turning to gold, the sun spinning, the smell of roses, etc., but I also knew that if I focused on looking for these “signs,” then I would miss out on why I was really there.

Our group’s first full day was a busy one, as we ran between the rain drops, getting acclimated to the village. We ended up at the Risen Christ statue, located a short distance behind St. James Church, and there the guide asked if I would lead the Stations of the Cross. I agreed, hesitantly, since I didn’t have a meditation booklet with me, and asked the Lord to open my heart and give me thoughts to verbalize. As I began, I could no longer feel my body and the words simply flowed from my mouth, as the rain became steadier. When I had finished, people approached me, asking for the name of the booklet I had used, since they found the reflections very meaningful. 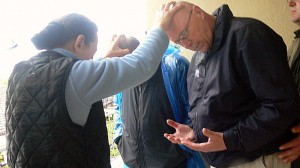 On the day we were to climb Cross Mountain, one of the pilgrims came over to me and said that I would smell roses. I chuckled because it was the end of October, and there were no flowers growing. Besides, my sinuses were pretty clogged. I laughed and said, “I hope our Blessed Mother is a good ENT (ear, nose, and throat doctor), since I really can’t smell anything right now.”

We began to climb slowly, since there were about forty of us. Every so often the woman would look over at me to see if I had smelled anything, and I would shake my head, “No.” Then the whiff of a sweet fragrance came disappeared, as quickly as it had arrived, as if someone had whisked by me. I nodded, “Yes,” to her and she gave me a “thumbs up.” This happened two other times, as we continued the climb.

Finally we arrived at the top, and I found myself pausing a little past the mark of the fifteenth station of the cross, in order to take in the sacred atmosphere. The group had begun their final ascent up the roughly hewn stairway to the white cross, erected at the peak of the mountain, while I looked and laughed at a beautiful piece of grass, which covered earth, about thirty yards in front of me. Nowhere else on the mountain was there any grass to be found. I thought, “This is a golfer’s dream to hit balls off this mountain,” (although I have never played golf nor ever held a golf club). At that moment, I heard a distinct woman’s voice say, “Neil, come over here.” But none of the women from the group had spoken to me. I walked over and stood in the middle of this plot of green grass and looked up at the cross and then the sun, to see if I would see anything unusual or miraculous. The cross didn’t spin, nor did I see Jesus hanging on it, and the sun didn’t spin, nor did the face of Jesus or Mary appear on it. I threw up my arms and said, “What do you want? Did you call me?” All of a sudden, I was standing in a vacuum of roses. The sweet fragrance was overpowering. I didn’t know if I should be jumping up and down praising God or lying face down in the grass. I called out excitedly to the woman who told me I would experience the smell. She was twelve feet away from me and began to smile and laugh and say, “Do you smell the roses? The Blessed Mother is here.”

I felt extremely sad when the morning came for our departure. Even though I knew that I would somehow be back at least once every year, I still did not want to go home, for this was now “Home.” That trip was in October of 2002, and I have been to Medjugorje nineteen times since, and still look forward to going back.