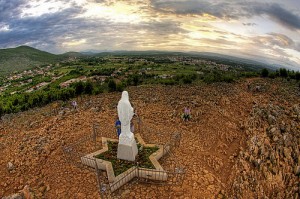 Apparition Hill where Our Lady first appeared in 1981

The Virgin Mary will give ten secrets to the visionaries of Medjugorje and within their lifetimes, these will be revealed to the world. Three of the visionaries, Mirjana, Ivanka, and Jakov have all ten secrets and no longer see Our Lady daily. Marija, Vicka, and Ivan have nine secrets.

The third secret will be a lasting sign, spontaneously appearing on Apparition Hill, where the six visionaries experienced their first apparition. The sign will be permanent, indestructible, and beautiful, something that has never before been on the earth, and those who do not believe in God will not be able to say it is of human origin.

A webcam has been placed in Medjugorje to show this area of Apparition Hill around the clock to viewers on the internet, and part of the reason behind this endeavor is to allow people to see the permanent sign as soon as it appears. During the day, once can see pilgrims climbing and descending Apparition Hill. When there is a nighttime apparition at the place where a statue of Mary now stands, one can see the flashlights of pilgrims as they negotiate the rocky trails. See http://www.medjugorjevideo.com/webcam/bigcam.html.

The following interviews are selected and adapted from Medjugorje.com. In their own words, some of the Medjugorje visionaries explain what they can about the third secret:

Martin Sheen, during the interviews for his Medjugorje documentary, “The Lasting Sign,” asked Ivan the following question:

Martin Sheen: “So many people have heard of the prediction of a sign that will occur evidently here in Medjugorje that will confirm that these apparitions have, in fact, been taking place with you and your friends and the Holy Mother. Any ideas of what this sign might be?”

Ivan: “We know the sign and when it will be and what it will be. It will be on the place of the apparitions, where Our Lady appeared for the first time, and all the rest is a secret.”

Question: “Mirjana, what, if anything, are you permitted to tell us about the Ten Secrets?”

Mirjana: “The first two secrets come as advance warnings for the whole world and as proof that the Blessed Mother is here in Medjugorje.”

Question: “And the third secret?”

Mirjana: “The third secret will be a visible sign at Medjugorje – permanent, indestructible, and beautiful.”

Marija: “Our Lady told us that She will leave the sign on the Hill of the Apparitions.

Question: “Is there anything you can tell us about the sign the Blessed Mother has promised to leave us?”

Marija: “It will be a visible sign for all the unbelievers to see. But, for those that already believe, they do not need a sign.”

Marija: “There are signs in many places in the world now. Many people see luminary signs. Many experience personal healings, both physical and spiritual, and also psychological. Many have private signs. People have come here from all over the world. Often they have or have had extraordinary signs in their lives.”

Question: “Will all people on earth believe in God, in the Blessed Mother when the permanent sign occurs?”

Marija: “The Blessed Mother has said that those who are still alive when the permanent sign comes will witness many conversions among the people because of the sign, but She also says blessed are those who do not see but who believe.”

Question: “Mirjana told me that there will still be some unbelievers even when the permanent sign comes.”

Marija: “The Blessed Mother has said there will always be Judases.”

Question: “Vicka told me that there is great urgency in the Blessed Mother’s call to immediate conversion. She said that for those who only marginally believe, who choose to wait for the great sign to believe, it will be too late. Do you know why it will be too late for them?”

Marija: “This is a time of great grace and mercy. Now is the time to listen to these messages and to change our lives. Those who do will never be able to thank God enough.”

Question: “Do you know when the permanent sign is coming, Jakov?”

Jakov: “Yes. When the permanent sign comes, people will come here from all over the world in even larger numbers. Many more will believe.”

Question: “Will all people believe because of the permanent sign, Jakov?”

Jakov: “The Blessed Mother said that there will still be some who will not believe even after the permanent sign comes.”

Question: “Do you know what the permanent sign is, Jakov?”

Question: “Can you tell us anything about it?”

Jakov: “It will be something that has never been on the earth before.”

Question: “Jakov, why will some still not believe?”

Jakov: “They will not put themselves in a position to be converted.”