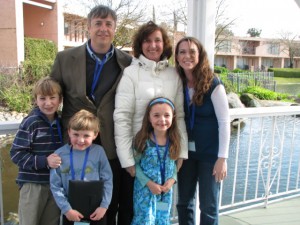 On my first trip to Medjugorje, in 1987, I was instantly drawn to the Medjugorje visionary, Marija, in a spiritual way. I prayed to Our Lady to allow me to know Marija better as a friend, in order to learn from her how to love God more by living Our Lady’s messages. Through God’s providence, little steps led me closer to her, and on my third trip to Medjugorje, in 1990, I was able to spend as many as twelve hours a day with her for three months. We became close friends.

My twin brother befriended her, as well, and that year we helped her in many ways: planting flowers, feeding the chickens, taking out the garbage, cementing the driveway, rearranging her furniture. We had the honor of escorting her to and from the apparitions at St. James Church. Each day pilgrims would gather in her courtyard, and she asked me to lead them in the rosary. When she spoke in Italian or Croatian, I would verbalize her presentations on Our Lady’s messages in English.

This was more than a dream come true, because I felt so unworthy. Three years later, I would have similar feelings when I attended, through personal invitation, her small family wedding in Milan, Italy.

Marija has received daily apparitions, since 1981, when the Virgin Mary first appeared in Medjugorje. At the nuptial Mass, Our Lady appeared to Marija after Holy Communion, when all was quiet in the church. She gave her blessing and prayed for several moments over those gathered. Marija told me that Our Lady appeared happy. No public message was given.

As I stood in line after the wedding to greet the bride and groom, I was a little nervous. But Marija was as happy and natural as usual. After a hug and kiss, she said, “I am so happy to see you. This is one great grace for me . . . I think I have to get married, in order for me to see you!” Marija has a great sense of humor. Then she jokingly berated me for not coming to Medjugorje last spring, when she knew I was in Rome. I stood there speechless.

The hardest part of my trip was saying goodbye to my friend. I told Marija I hoped it wouldn’t be so longbefore we met again. I told her I loved her. Her parting remark to me meant so much. “I love you, too,” she said. 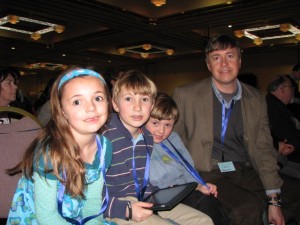 Though we exchanged several letters over the next eight years, I didn’t know if I’d get to see her again in person, until I caught wind that Marija would be speaking at a Medjugorje conference, On March 26, 2011, in Sacramento, California–only an hour’s drive from Napa, where I presently live with my wife and three young children. March 26th was also my daughters eighth birthday.  At that conference, I was able to reconnect with Marija and introduce her to my wife and kids. I was so happy to see her again. That evening, Marija was to have her apparition in the main conference hall, packed with people. My family and I visited with her privately outside during the day, and then, like the good old days, I escorted her into the hall where she was to give a talk. As we walked in, I 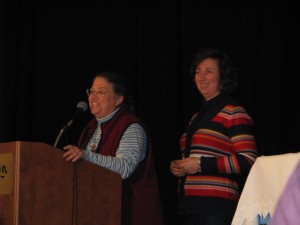 told Marija I still prayed the rosary in Croatian, like she had taught me to do in 1990. After Marija gave her talk, all of us—about one thousand people—began praying the rosary, in preparation for her apparition at 5:40 pm. Marija knelt on the conference stage, before a statue of Our Lady, and I knelt just behind her on the floor. I had been begging Our Lady for the opportunity to reconnect and renew my friendship with Marija, and now I was praying to have my kids kneel next to Marija for her apparition, since it was my daughter’s birthday. I didn’t dare ask Marija myself.

While a translator was leading the first part of the “Hail Mary” from the microphone, everyone was responding in English, except for Marija and me. Since I was kneeling so close to her, she heard me praying in Croatian in unison with her, and about two minutes before her apparition, she turned around to me and pointed to my daughter who was kneeling beside me. I understood she wanted me to pick her up and set her on the stage next to her.  After that, she point to my five year old son, John-Paul, and I did the same with him. She then pointed to my oldest son, Anthony, who is ten, to see if he wanted to kneel on the stage too, but he was content kneeling next to me, since there was not much room left up there anyway. Our Lady then appeared and looked lovingly at all the people gathered and prayed over us with her arms extended. 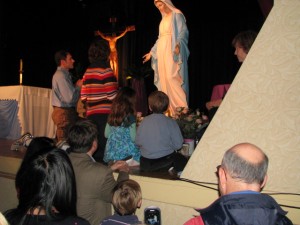 Needless to say, it was a huge blessing for me and my family to experience exactly what my heart had begged for. On top of that, the next day at the conference, Marija gave me the rosary she prayed with and held during the apparition and said it was for my daughter Melanie. I then gave her a copy of the picture we took together with my family the previous day, just before her talk, and she smiled and said she would keep it in her prayer book! Our Lady knows our desires, and I truly believe those events with Marija were her way of expressing her love for me.