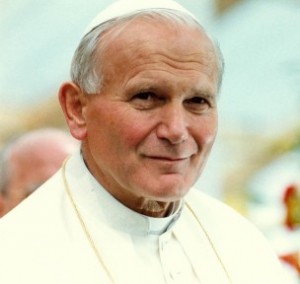 Monsignor Slawomir writes: “His devoted love for Mary only grew and flourished when the connection between the third secret of Fatima and the assassination attempt of May 1981 became clear. In connection with the dramatic event, extrajudicial sources confirm, John Paul II also saw a link with the apparitions of the Queen of Peace in Medjugorje, in the former Yugoslavia, which began at the end of June of the same year. The Pope spoke of it in very favorable terms and said, ‘To say that nothing is happening at Medjugorje means denying the living and praying testimony of thousands of people who have been there.'”

Monsignor Slawomir continues: “Although [John Paul II] never took an official position on these apparitions, in private Pope Wojtyła did not conceal his own belief. To Monsignor Murilo Sebastião Ramos Krieger, archbishop of Florianopolis in Brazil, who was going for the fourth time on a pilgrimage, he confirmed, ‘Medjugorje is the spiritual center of the world.’ In 1987, during a short conversation, Karol Wojtyła confided to the seer Mirjana Dragičević: ‘If I weren’t Pope, I would already been in Medjugorje confessing.’ This intention finds confirmation in the testimony of Cardinal Frantisek Tomasek, archbishop emeritus of Prague, who heard him say that, if he weren’t Pope, he would have liked to go to Medjugorje to help with the pilgrimages.”

John Paul’s postulator goes on to cite further testimony from the bishop of San Angelo, Texas, who offered the quote from the Pope about the testimony of thousands.

Monsignor Slawomir also says John Paul II sent Slovakian Archbishop Pavel Hnilica, “one of the prelates who was closest to the pontiff,” incognito to Medjugorje. Slawomir quotes the letters John Paul II sent to Polish friends Marek and Zofia Skwarnicki, referring positively to the apparitions. “I too go there every day in prayer,” the Pope wrote. “I am united with all who are praying there and who receive the call to prayer from there.”