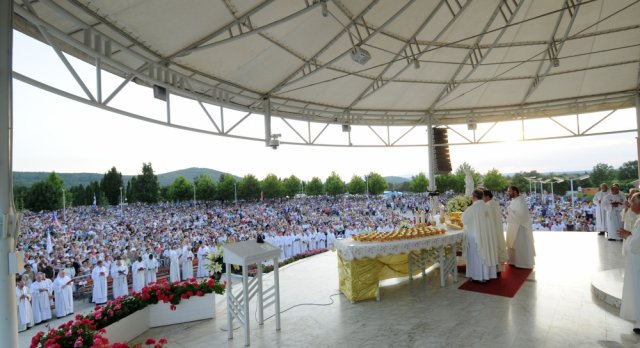 To celebrate the 30th anniversary of the apparitions, 282 priests, (according to the official Medjugorje website,) and thousands of pilgrims gathered in Medjugorje for spectacular international Mass.

As with past anniversary celebrations, the visionaries gathered together to celebrate in unison with the pilgrims. Noticeably absent this year was the visionary Vicka. According to a well-known local guide, Miki Musa, Vicka received an accidental injury from a pilgrim who pulled at her hand, causing her to suffer terrible pain in her arm. Vicka had just recently resumed speaking to pilgrims from her grandmother’s porch, at Christmastime in December of 2010, after being absent for almost a year, due to a serious and painful back injury. 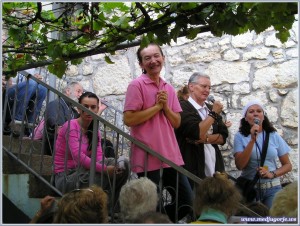 Yet Vicka never appears like she’s in pain. She smiles through her suffering, because she has discovered the secret of the saints—joy in suffering, which sets her heart on fire.

From the beginning of the apparitions, Vicka entered into pain. As a paragraph from medjugorje.com states, regarding an incident that happened during the late 1980’s . . .

“Our Lady, on a surprise visit, took Vicka and Jakov with Her to visit Heaven, Purgatory and hell. Vicka was moved to great compassion for the souls in Purgatory. Vicka asked Our Lady if there was something she could do to help them, if she could offer herself for their expiation. Our Lady accepted her offer when She was certain Vicka understood the seriousness of what she was asking. Shortly afterwards, a mysterious illness afflicted Vicka, causing her to suffer from extremely painful headaches and high fevers that were so severe, she would often fall into comas. Often during these episodes, she was semi-conscious and obviously suffering, though she always would awaken a few minutes before Our Lady’s apparition each evening and appear smiling and happy. At one point, her mother begged Vicka to ask Our Lady to cure her, but Vicka responded that if her mother knew how much good her suffering was doing for the poor souls, she would not ask this of her. In January 1988, Our Lady told Vicka her suffering would soon come to an end, giving her the exact date her illness would disappear, though she was to tell the date to no one with the exception of her confessor. The commission investigating the apparitions was given the date in a sealed envelope. On September 25, 1988, the headaches and symptoms disappeared, never to return. Members of the commission, upon opening the envelope, discovered the same date therein.”

Vicka believes that all suffering is for someone, and this gives her great confidence that her suffering is of great value to God. As part an interview, which is given in full on www.marytv.tv, Vicka shared with Father Livio Fanzaga on Radio Maria in Italy, her views on suffering:

PADRE LIVIO – Well, I had another thought about it. […] Seeing as how you were asked by the Madonna to pray for the sick, maybe the Madonna wants you to be like a living message of how to be patient in accepting all this suffering that you’ve been through.

VICKA – For sure, suffering cannot be explained, suffering can only be lived in one’s own heart. When the Lord gives us a suffering, a cross, pain, this is really a big gift that God gives. We often think, how can sickness be a gift? But it’s a big gift! Only God knows why he gives this gift and only He knows the reason for when He takes it back. It is only up to us how we are ready to accept this gift. The Madonna told us that many times when this gift come to us we always ask a thousand questions, and she says stop asking questions. It is enough to say, “I Thank you God for this gift, that you still have something that you want to give to me, I am ready to receive it. I ask only your strength and courage so that I may carry on”. And also the Madonna has already told us, “you don’t know how great is the value of your suffering in the eyes of God”. I am telling you what I am able to through my own suffering… my suffering is a gift…. I am not saying that we are always 100% ready to embrace suffering but I have a great desire, a great joy to suffer something for the Madonna and for Jesus. There is nothing that I wouldn’t willingly suffer for them. The Madonna can say to me, “Vicka, do this, do that”, and I await with all my heart, with open arms. Because I want to respond to that to all the good that the Madonna has given to me, and with what little is mine suffering I can respond with this to her love. And so I say to you, dear listeners, when you are suffering, and today there are different kinds of suffering: there is the suffering that God gives and there is the suffering that we make for ourselves and these are two different things, they don’t have the same value. We must try to accept that which the Lord wants and we must give thanks and when one gives thanks for this great gift, then graces and fruits and everything come sooner. And then we can’t say “I’m suffering, I’m in pain”, God knows this: accept it, don’t talk about it. One who is still able to speak isn’t suffering. Suffering is to be lived in our soul and in our hearts.

PADRE LIVIO – I seem to recall that on several occasions the Madonna spoke about smiling though one is suffering.

VICKA – Certainly, and this too is really beautiful. Because when you smile in your suffering it’s because you have accepted it and you belong totally to God and afterwards you don’t perceive the suffering anymore but you will feel joy; because you suffer with joy there is no tension, there is nothing that tires you, you feel very happy. But that joy doesn’t come from anything outside, it comes from within you, from your heart. And you feel an urge, every day it becomes stronger, and you don’t feel the heaviness anymore. I don’t feel any heaviness, I feel a joy so great that I want to do more for the Madonna, to suffer more, and you feel the suffering but there is a great happiness, there is love, because you suffer, you bear the suffering with love.

Let us pray for Vicka, who is suffering now, although her glowing smile would never betray it. 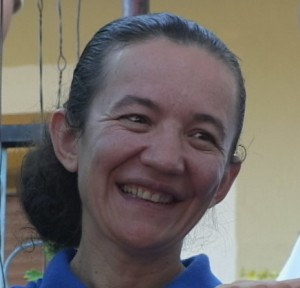