Visionary Mirjana Soldo, standing in front of her home in Medjugorje. October, 2011

Mirjana collapsed in tears after the October 2nd apparition in Medjugorje. For the first time since the beginning of the apparitions, in 1981, she shared her own words to the world, preceding the Blessed Mother’s:

“I have never said anything before,” said Mirjana, “but are you aware, brothers, that the Mother of God was with us? Each of us should ask himself: ‘Are you worthy of this?’ I am saying this because it is difficult for me to see her in pain, because each of us is seeking a miracle, but does not want to work a miracle in himself.”

“Dear children!” said Mother Mary, in her message. “Also today my motherly heart calls you to prayer, to your personal relationship with God the Father, to the joy of prayer in Him. God the Father is not far away from you and He is not unknown to you. He revealed Himself to you through my Son and gave you Life that is my Son. Therefore, my children, do not give in to temptations that want to separate you from God the Father. Pray! Do not attempt to have families and societies without Him. Pray! Pray that your hearts may be flooded by the goodness which comes only from my Son, Who is sincere goodness. Only hearts filled with goodness can comprehend and accept God the Father. I will continue to lead you. In a special way I implore you not to judge your shepherds. My children, are you forgetting that God the Father called them? Pray! Thank you.”

My friend, Jane Lee, traveled to Medjugorje with Trinity Pilgrimages and stood hear Mirjana, during her October 2nd apparition. A couple in Jane’s group, who had been present at seven of Mirjana’s past apparitions, said this time, Mirjana’s face was different. See video above. Never before had she looked so distraught, to the point of collapsing in tears, when the apparition ended.

Jane shared in an email to me how the people on her pilgrimage responded to Mirjana’s reaction, and she recorded Mirjana’s personal words to them regarding why she gave the message. 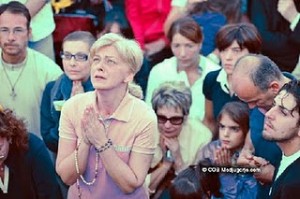 Mirjana, her face full of pain, as she sees and converses with the Virgin Mary, during her apparition on October 2, 2011

“What struck us,” said Jane, “was how tragic Mirjana’s expression was right after the apparition was over. We knew that it was very very bad. Whatever she had heard, whatever she had experienced, was profound. Here’s the transcript of how we asked Mirjana about her historic and uncharacteristic supplementary message. Mirjana’s eyes became teary as she answered us.

Q: ‘After the apparition yesterday, you had a special message of your own for us can you explain what prompted you?’

A: (through Miki, the translator): ‘I don’t know what happened to me, ’cause I never did that.  After thirty years, that was the first time I said something. And it’s a little hard for me to talk about it. That is still kind of fresh. [tears in eyes] I’m sorry that people do not comprehend what is important. But people are looking for miracles and not what is the most important–miracle within oneself. To come to know the love of God. Because you waste your time. And the tears in Our Lady’s eyes [are] because of you. And how come you do not comprehend? And that pain that I was looking at her like that, I simply had to say something. Because she has so much love, patience. And we are so deaf.  That caused me so much pain I had to say something.'”

By Christine Watkins, author of Full of Grace: Miraculous Stories of Healing and Conversion through Mary’s Intercession.