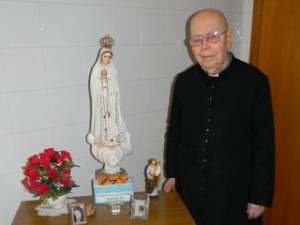 Father Gabriele Amorth is the leader of Rome’s six exorcists. He is also the most famous Catholic exorcist in the world. People come to see him from all round the world to ask for help in defeating satanic oppression, in other words, to combat the devil in all his various activities against mankind.

Now 86 [born in 1925], he belongs to the Society of St. Paul, the Congregation founded by James Alberione in 1914. Known for his intense activity in mass communication. Fr. Gabriele too, for many years, was involved in media, and edited the magazine, Mother of God. As well as a theology degree, Fr. Gabriele has graduated in law. Having written many books and essays about the Virgin Mary, he has acquired the title of expert in Mariology, has been nominated as a member of the Pontifical International Marian Academy. But since having been entrusted with the role of exorcist in the diocese of Rome, his time has been completely consumed by his new ministry. These days he is considered the world’s leading expert on problems concerning Satan and his evil activity towards the  human person. He is the “doctor” par excellence for illnesses caused by evil, the “surgeon” who knows how to root them out, fight, and prevent them.

In an interview Fr. Amorth granted to Renzo Allegri, which was published in “Messenger: St. Anthony,” amost a decade ago, he states:

“I would never have thought I’d be asked by the Church to carry out such a difficult mission. Ugo Poletti sent me the mandate when he was vicar of the diocese of Rome and President of the Italian Episcopal Conference (CEI). Luckily, at the beginning, I was the helper of one of the greatest exorcists that ever existed, Fr. Candido Amantini, a holy man whose cause for beatification is about to be opened. He was an exorcist in Rome for thirty-six years and was an incredible teacher.” 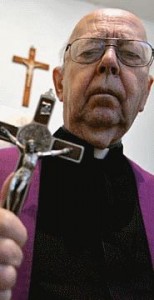 Renzo Allegri writes, “It is difficult to arrange a meeting with Fr. Amorth especially as he never has a moment free. For this interview he managed to spare a few hours one Thursday morning, but even during our conversation, he received telephone calls from people all over the world who were in need of him. ‘It is incredible,’ he says, ‘to see how many people look for an exorcist, and unfortunately there are few priests who are able to help them. For several centuries, the Church has overlooked the ministry of exorcism.'”

“He speaks with determination. His faith is unwavering, based on the Scripture and on the teachings of the Church. He reveals a deep knowledge of the subjects he discusses, extensive experience sustained by numerous case histories. ‘I think I must have carried out over 70,000 exorcisms in my lifetime. The problems I am called to deal with every day concern people who are suffering physically, psychologically and spiritually. These problems are caused by the Devil. At times they are so serious they lead a person to suicide or death. Faced with many priests who reveal themselves to be skeptical, indifferent, or who consider these problems to be the fruit of imagination or obsession, I get very angry. Contemporary religious culture, while not negating the existence of Satan and the other rebellious angels, is inclined to diminish their influence over people. Discrediting this influence is almost compulsory and is considered a sign of wisdom. This mentality, which is completely wrong, is commonplace not only among lay people, but also among priests, theologians and even bishops, the practical consequences of which are far-reaching.’”

For Fr. Amorth, the devil is very real. He told “La Repubblica” that the devil was “pure spirit, invisible. But he manifests himself with blasphemies and afflictions in the person he possesses. He can remain hidden, or speak in different languages, transform himself or appear to be agreeable. At times he makes fun of me.”

He said it sometimes took six or seven of his assistants to hold down a possessed person. Those possessed often yelled and screamed and spat out nails or pieces of glass, which he kept in a bag. “Anything can come out of their mouths – finger-length pieces of iron, but also rose petals.”

He  hoped every diocese would eventually have a resident exorcist. Under Church Canon Law any priest can perform exorcisms, but in practice they are carried out by a chosen few trained in the rites. He was among Vatican officials who warned that J. K. Rowling’s Harry Potter novels made a “false distinction between black and white magic.” He approves, however, of the 1973 film The Exorcist, which although “exaggerated,” offered a “substantially exact” picture of possession.”

Throughout the years, Fr. Amorth has embraced Medjugorje. He has called the place, “a great fortress against Satan.” The following is a September, 2011 interview on Radio Maria with Fr. Gabriele Amorth. Fr. Amorth was speaking before the backdrop of the Virgin Mary’s message of August 25, 2011, when she said:

“Dear children! Today I call you to pray and fast for my intentions, because Satan wants to destroy my plan. Here I began with this parish and invited the entire world. Many have responded, but there is an enormous number of those who do not want to hear or accept my call. Therefore, you who have said ‘yes’, be strong and resolute. Thank you for having responded to my call.”

“How bitter, how bitter was the last message of Our Lady of Medjugorje on August 25: ‘Many have responded, but there is an enormous number of those who do not want to hear or accept my call,'” Fr. Gabriele Amorth first commented.

“The Gospel is so clear. It tells us how to discern! By the fruits you will know the tree! It has been thirty years that Medjugorje has given us fruits that are ultimately exquisite! Confession, conversion, vocations, graces of every kind! For more than thirty years!” the exorcist reminded on Radio Maria.

“In the Old Testament, God sent prophets to warn of the betrayals of the Jewish people. Now, here to warn of the betrayal of the Christian people, also the priests, God sends us His Mother! It has been thirty years! Is it possible that people still do not hear? And as for those people who believe themselves to be intelligent by saying they’ll wait until the Church approves? They are fools!” said Fr. Gabriel Amorth.

Article excerpted and adapted from