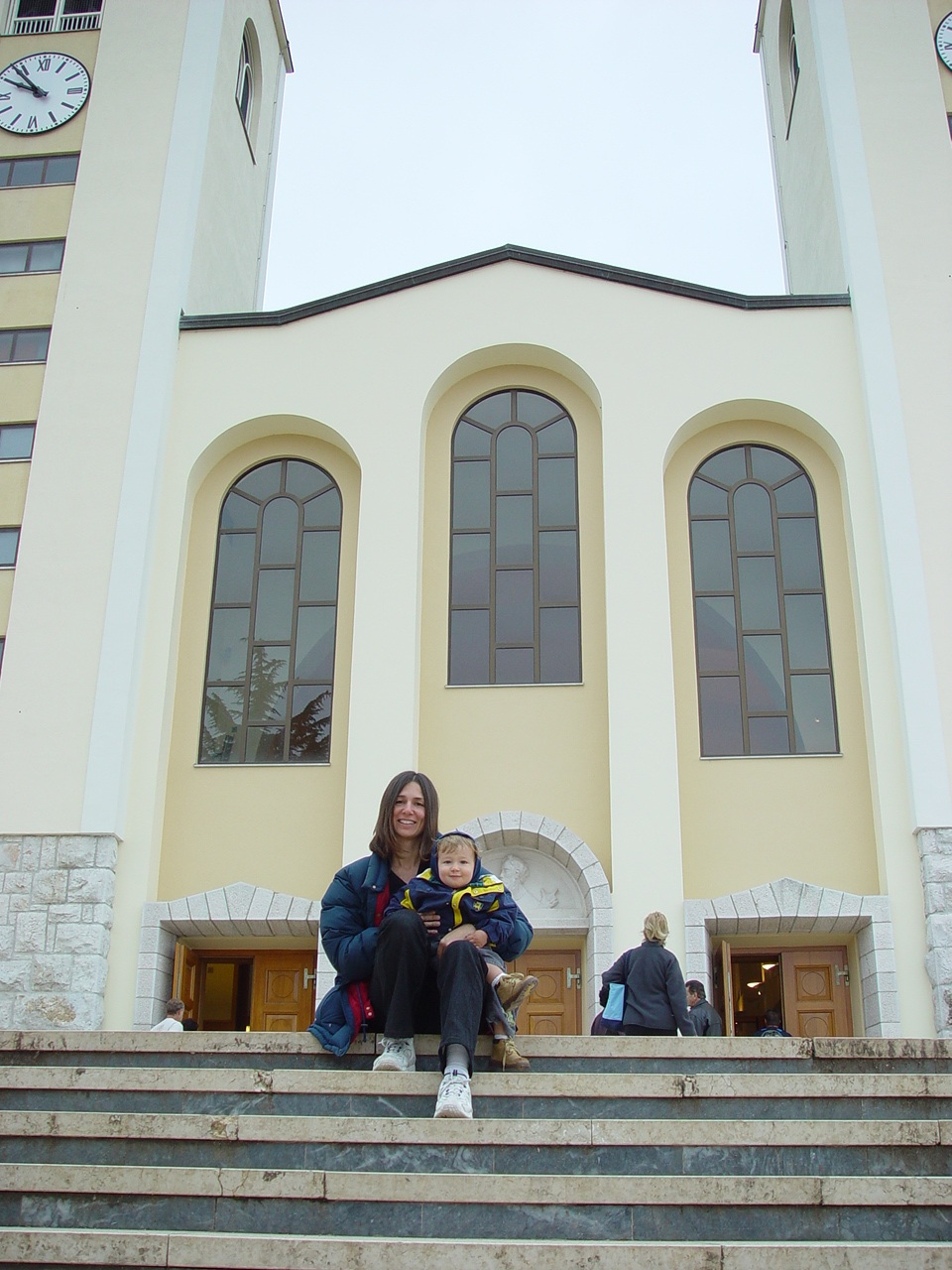 Christine Watkins with her son, Christian, in front of St. James Church in Medjugorje

Not once did I intend to travel half the circumference of the globe to Medjugorje, a small town in Bosnia-Herzegovina, the former Yugoslavia. I even poked fun at people who made return voyages to this distant place where the Blessed Mother was allegedly appearing in our lifetime. These repeat offenders and other past pilgrims seemed far too eager to send me overseas. At the Medjugorje conferences I attended, they would say to me with pleading eyes, “You should go!” They talked about a peace not of this world, reports of miracles, and handed out rosaries like Halloween candy. But why must I go? I wondered. I had no objection to the idea of Mary appearing in Medjugorje and giving messages. She had visited earth many times following her Assumption, and her current and repeated pleas from a mother’s heart, calling the world to prayer, fasting, receiving the Eucharist, reading the Bible and going to confession seemed sound enough. Her words could hardly benefit the designs of the devil; and were Medjugorje of human origin, its six visionaries, persecuted by the communists when the visions began in 1981, and hounded by pilgrims asking the same questions every day since, would have called it quits long ago. As one of the seers, Mirjana, put it:

“I also often asked myself: Why should I invent such a lie? If I were lying, this would make me an abnormal person. Even during communism, the doctors stated that we were normal. I had a nice life. I lived with my parents as the only child for nine years; they cherished me. Why would I want to turn my life upside down? Why bring turmoil, anxiety, agony and pain into my life – why? In my opinion, only an unstable person can do such a thing.”* (See previous post.)

Since I needed no convincing, I saw no reason to join a pilgrimage even once, much less multiple times, like those odd repeat-pilgrims who perhaps had an over-abundance of free time, too much money, or a fanatical streak? Couldn’t I just get in my car and cruise to St. Barnabas Church just five minutes away from my home? After all, the Eucharist was there.

Be careful what you make fun of. I have since traveled to Medjugorje five times.

Each trip was an unexpected calling full of untold graces, practically ducktaped together with frequent flyer miles and faith. My first pilgrimage with my husband saved my marriage. On my second trip, God asked me directly to write a book of Medjugorje conversion stories, now a bestseller for Ave Maria Press called, Full of Grace: Miraculous Stories of Healing and Conversion through Mary’s Intercession. The third time, I providentially met two people whose stories ended up gracing the book. I organized the fourth trip and gathered a group of friends who received heavenly gifts. The fifth time, ABC television planned to interview me there, so I hopped on a plane again and experienced that peace I’d always heard about—a sweet ecstasy that satisfies every longing, every possible desire of the human heart. 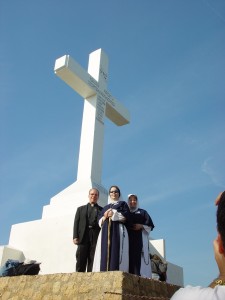 The 14-ton, 12 meter-high cement cross atop Cross Mountain in Medjugorje

On those trips, I discovered that in Medjugorje, the miraculous is commonplace. The following are but some of the experiences of my family and friends alone: the miracle of the sun, where one can stare safely at it; the uncommon desire to pray for hours; the spontaneous healing from chronic, debilitating back pain; lightning striking earth in rainbow colors; a vertical light splitting the sky in two on a cloudless day, a fourteen-ton, twelve meter-high cement cross, free from all electricity, lit up and spinning like a top at the summit of Cross Mountain; a beating heart appearing in the host during Adoration of the Blessed Sacrament; the smell of roses where no roses or perfumes were present; atheists finding faith without foxholes; breast cancer healed; cures of debilitating depression and anxiety; golden clouds in the sky and a golden dust covering the earth. The millions of other people who have passed through Medjugorje would undoubtedly have more to share. . .

One never knows what will happen in Medjugorje, because Medjugorje is part Earth, part Heaven.  Even with the modern build up of hotels and religious knick knack stores at every turn to shelter and cater to the growing stream of pilgrims, Medjugorje captivated me. I didn’t know that a physical place on Earth could contain so much of heaven. Never before Medjugorje had I experienced such intense spiritual communion, such palpable belief, everywhere I looked. In Medjugorje, graces seemed to rain down in torrents, renewing parched souls with the living water Jesus offered to the woman at the well. I once heard a priest say, “Show me another place on earth besides Medjugorje where I can take teenagers for a week and they come home transformed, and I’ll take them there instead.”

The Mother of God has introduced herself in Medjugorje as the Queen of Peace, and she clearly desires to impart that peace to her children. The peace often granted to souls through Medjugorje is not that of a relaxing vacation, a human embrace, or a happy outcome. It is the peace of Philippians 4:7, which surpasses all human understanding and guards our hearts and minds in Christ Jesus. I remember standing in front of St. James Church in Medjugorje, doused in peace, and thinking that there must be something I should be concerned about, but my mind refused to worry.

One particular moment of peace stands tall in my memory above the rest. After eating dinner at a restaurant where I sat near a table seating the three-person crew from ABC television, I left to walk a short block to the area behind St. James where hundreds of people sat outside in the warm summer night air, facing the Blessed Sacrament—a large Host carefully placed in a stunning monstrance circled by golden rays. As I walked into the midst of the Real Presence of Jesus, a multitude of prayers, and sweet live music, I felt overcome with a deeply peaceful, tingling, ecstatic joy that filled my heart to capacity. When I sat down to pray, that capacity somehow grew. Giddy waves of peace carried my heart off to heaven while it somehow remained in my chest. Off to the left, the sky flashed with lightning, but without a sound, as if the Holy Spirit were delighting in showing himself off to his people—perhaps he was.

Suddenly I became the one acting like a crazed fanatic. I promptly stood up and ran back toward the restaurant. If only the ABC crew could experience this! Surely then their hearts would be touched, and they could share with the world what was truly happening here at this holy site.

I bounded back into the restaurant trying to calm myself down. Still gasping for breath, I approached the crew’s table and exclaimed, hardly making sense: “You might want to see this. You might want to film this. The peace—the lightning with no thunder–the music, the multitudes. It’s so beautiful. It’s warm. It’s adoration. It’s what we Catholics do. Then looking at them with pleading eyes, I said, “You should go!”

They looked at me with courteous amusement , and then I left. They never budged. They hadn’t finished their beers and saw no reason to disturb their comfortable dinner. Without interest or faith or the desire to change, even one block is too far to travel.

Miracles are simply neglected sideshows when the soul is left untouched. As Fr. Jozo Zovko, OFM, the pastor of St. James church when the apparitions began, once said: 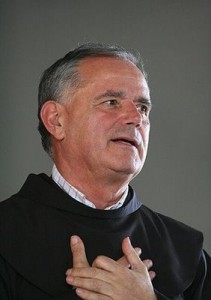 “In Medjugorje, the miracle is not so much in Our Lady’s apparitions or in the words she speaks to us, but in the pilgrim’s reply, who accepts to change his heart and life. That is the great miracle!

Take St Francis: the miracle was not that Jesus spoke to him, but in the fact that he gave up everything to become poor in everything.

In the Gospel we read of the rich young man who was called by Jesus. The miracle wasn’t that he saw Christ and heard his call; it would have been in his response, had he responded. But he preferred his riches to Jesus. That is a miracle which did not occur.

It is not a miracle for God to talk; it is normal. In Medjugorje it is the pilgrim who decides if a miracle will occur or not. All he has to do is to open his heart to respond to the call.”*

Medjugorje would mean nothing without the conversion of the human heart. My work gathering stories for the Full of Grace book introduced me to Medjugorje’s inner world, the world within each heart, as I wrote down some of the most amazing conversions I had ever heard: a former crack addict who experienced his own apparition of Mary in Medjugorje and is now completely free from his addiction; a lonely youth who found healing from abortion, depression, and anxiety; a Nobel Peace Prize who, with Mary’s help, rescues children living in the sewers of Colombia; a violent, homeless heroin addict, diagnosed as paranoid schizophrenic who is now a happy, sane, kind-loving family man; a former stripper who has considered becoming a nun; and a former atheist, who was me, caught up in serious sin and miraculously saved from imminent death through Mary’s Intercession. The book and subsequent talks I’ve given around the country have introduced me to hundreds of Medjugorje conversion stories, more than the mind can run after.

Such graces have to come from heaven. They can’t possibly come from man. As I encountered testimony after testimony, I saw how each conversion, healing, or a prayer answered ministered so perfectly to the individual that only an all-knowing, all-loving, Almighty God could manage such feats. No human being could weave such tapestries of exquisite experience, could manipulate lives with such life-altering results and reach the heart where only God can speak. Like seashells, or grains of sand, or snowflakes, each story was intricately unique, beautiful, and perfect—so clearly created by an infinitely fertile imagination. If souls say yes to what Mary is asking, they become a holy expression of their true selves. And they find true peace.

“There is only one danger alone for Medjugorje – that people will pass it by!”**

as one of the greatest theologians of our time

Catholic speaker and author of Full of Grace: Miraculous Stories of Healing and Conversion through Mary’s Intercession.

** Entire quote from Medjugorje and the Church by Denis Nolan: “The theology of Medjugorje rings true. I am convinced of its truth. Everything concerning Medjugorje is authentic from a Catholic point of view. All that happens there is so evident, so convincing! . . . There is only one danger alone for Medjugorje – that people will pass it by!”– Cardinal Hans Urs von Balthasar