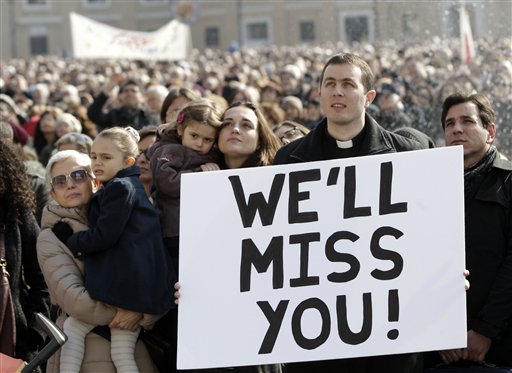 Worldwide Novena Opportunity for the Election of the Next Holy Father

(Written by Dr. Mark Miravalle, Professor of Theology and Mariology):

As the conclave for the next Holy Father soon approaches, it is the joyful responsibility of every Catholic to pray for the election process, to ensure the choice of the best possible successor to Pope Benedict XVI.

We must be on guard against all complacency which concludes, “The Holy Spirit elects the pope. I don’t need to pray for the conclave.”

When Pope Benedict was asked, “Does the Holy Spirit elect the next pope?” He responded:

I would not say so, in the sense that the Holy Spirit picks out the pope. … I would say that the Spirit does not exactly take control of the affair, but rather like a good educator, as it were, leaves us much space, much freedom, without entirely abandoning us. Thus the Spirit’s role should be understood in a much more elastic sense, not that he dictates the candidate for whom one must vote.

The Pope’s response underscores the imperative for the Catholic faithful to pray fervently with committed hearts to the Holy Spirit, that the conclave of cardinals elect the candidate most pleasing to God to become the next Vicar of Christ on earth. We, the faithful, must enter this historical papal election process by praying to the Holy Spirit that He will descend upon the conclave for the choice most pleasing to Jesus and most beneficial for the Church and for the world today.

Beginning March 1, 2013, the first day when the Chair of Peter will be vacant, I encourage you to join in this Worldwide Novena for the Election of the Next Holy Father. Please join Catholic brothers and sisters the world over in daily praying the Novena Prayer below (or any other prayer to the Holy Spirit that you may prefer) that the Holy Spirit may truly inspire the hearts of the cardinals of the conclave to choose the man that Jesus wants to guide the Church at this precise moment of human history. This Conclave Novena will end on the day the Church and the world hears the words, “Habemus Papam!” (“We have a Pope!”).

Lord Jesus Christ, Son of the Father, send down your Spirit over the conclave. Let the Holy Spirit inspire the hearts of the cardinals, that they may choose the man most pleasing to You, as Successor of Peter and Your Vicar on Earth. May Mary, Your Mother and Mother of the Church, be our Advocate. Amen.

Pope Quotes That Cause Concern

“Pray for me, that I may not flee for fear of the wolves,” Pope Benedict XVI said in his homily on April 24, 2005, at the Mass and imposition of the pallium at the start of his papacy.

From the beginning of his pontificate, the Pope Benedict XVI was dealing with and lamenting over a church divided, even in high places– one that is torn from without and from within. As he himself stated, “We may see that attacks against the Pope and the Church do not only come from outside; rather, the sufferings of the Church come from inside the Church, from the sin that exists in the Church. This was always common knowledge, but today we see it in truly terrifying form: the greatest persecution of the Church does not come from external enemies, but is born of sin within the Church.” —POPE BENEDICT XVI, interview on flight to Lisbon, Portugal; LifeSiteNews, May 12th, 2010

Trouble and divisions have been mentioned before. In his homily given on the Feast of Saints Peter and Paul on June 29, 1972, Pope Paul VI made a famous remark about the “smoke of Satan” entering into the Vatican. The Holy Father asserted that he has the feeling that “from some fissure the smoke of Satan has entered into the temple of God” (da qualche fessura sia entrato il fumo di Satana nel tempio di Dio (Insegnamenti ,1972, p. 707).

The approved Marian apparition in Akita, Japan (1973-1981) contains, in part, the following prophecy: “The work of the devil will infiltrate even into the Church in such a way that one will see cardinals opposing cardinals, bishops against bishops. The priests who venerate Me will be scorned and opposed by their confreres … churches and altars sacked; the Church will be full of those who accept compromises and the demon will press many priests and consecrated souls to leave the service of the Lord.”

Pope Benedict XVI, himself, prophecied a very different Catholic Church in the future. To read his prophecy and other related articles, click below:

Pope Benedict XVI’s Prophecy of the Future of the Church

Pope Denounces Division in the Church

“The Time of Testing Is Here,” he said recently

Let us pray and fast for the future of the Church