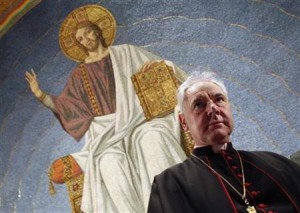 Archbishop Gerhard Müller, the Prefect of the Vatican Congregation for the Doctrine of the Faith, on whose behalf the papal nuncio writes his letter to the US Bishops

Prior to the release of the final report on Medjugorje, The Papal Nuncio to the U.S. on behalf of the prefect of the CDF Archbishop Müller has issued instructions “that no cleric or faithful may participate in any meetings, conferences, or public celebrations in which the authenticity of the apparitions are taken for granted.”

As Denis Nolan of Mary TV points out, it should be noted that the letter of instructions by Archbishop Carlo Vigano “is a procedural and not a doctrinal document.  It does not pronounce on whether or not Medjugorje is authentic.  It simply makes a prudential judgment to the effect that the faithful cannot participate in a PUBLIC event where the authenticity of the apparition is taken for granted.  It has no bearing on the private convictions of the faithful and, as noted, on the question of whether or not Medjugorje is an authentic apparition of the Blessed Virgin.”

As a result of this letter, the appearance of Medjugorje visionary Ivan Dragicevic’s scheduled public apparitions in late October in the U.S. were immediately cancelled. The Medjugorje visionaries are known for their strict obedience to and love for the Catholic Church, so this comes as no surprise.

Many will see this statement from the apostolic nuncio as the CDF tipping its hand as to what the final judgment on Medjugorje will be, and many will not.

Undoubtedly, some future debate will center around what it means to ‘take authenticity for granted.” Is it simply sufficient when giving or attending a conference, event, or Medjugorje related celebration that one mention  the apparitions are alleged? Perhaps this will depend on the opinion of individual bishops.

What remains true is that the Church has not yet made a final pronouncement on Medjugorje, neither approving or condemning the apparitions. The Church’s investigation is still underway. Church caution has historically been a part of the process of even those apparitions which were overwhelmingly approved–and approved only after they ended, such as in Fatima and Lourdes.

Until the final pronouncement on Medjugojre, the faithful may continue to travel there on pilgrimages currently offered, which have always been non-diocesan sponsored out of obedience to the Church’s continued investigation.

Meanwhile, the millions who have been converted, healed, and nourished by Medjugore will continue to live Mary’s messages of prayer, fasting, monthly Confession, Bible reading, and frequent reception of the Eucharist; and they will pass on her messages of love.

Below is the letter from the apostolic nuncio: 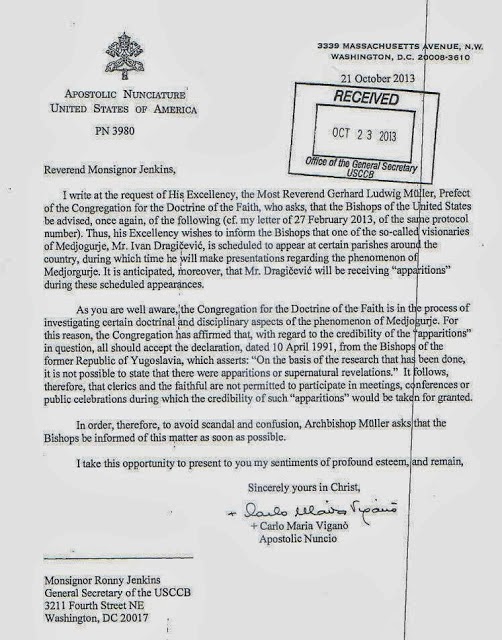