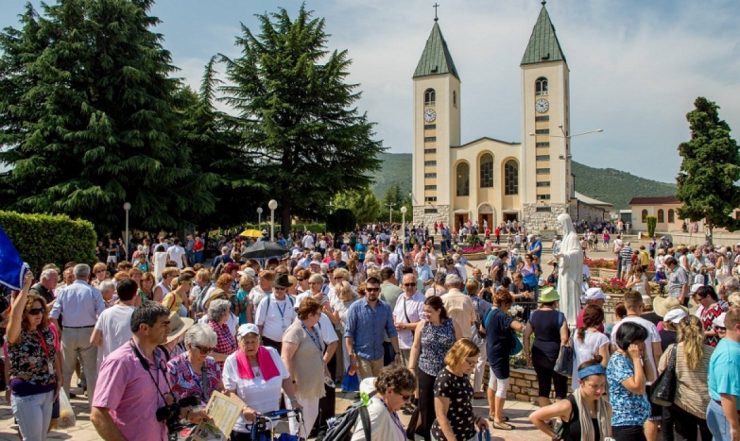 It may be of no coincidence that on Mother’s Day, May, 12, 2019, on the eve of the first Marian apparition at Fatima, that Pope Frances has authorized official diocesan pilgrimages to Medjugorje. The news was first announced at St. James Parish in Medjugorje, during the 8:00 a.m. Mass, in many languages. The Mass was celebrated by Archbishop Henryk Hoser, who had been appointed by Pope Francis as the Apostolic Visitor to Medjugorje on Feb 11, 2017. The Pope appointed Archbishop Hoser to reside in Medjugorje and provide help to the pastoral situation there, and on May 31, 2018, the Archbishop’s title was changed to “Apostolic Visitor” to Medjugorje. Shortly after his appointment, Archbishop Hoser said in a press conference held in Medjugorje, “You, my dear friends, should be carriers of the joyful news. Say to the whole world that in Medjugorje, we can find the light again.” Plans are now underway to expand the shrine to accommodate the growing number of pilgrims.

The “ad interim” director of the Holy See Press Office, Alessandro Gisotti, responded to journalists’ questions about the announcement:

“Considering the considerable flow of people who go to Medjugorje and the abundant fruits of grace that have sprung from it, this authorization is part of the particular pastoral attention that the Holy Father intended to give to that reality, aimed at encouraging and promoting the fruits of good.”

The apostolic visitor [Archbishop Henryk Hoser] “will have, in this way, greater ease in establishing relations with the priests in charge of organizing pilgrimages to Medjugorje, as well as, safe and well-prepared persons, offering them information and indications to be able to fruitfully conduct such pilgrimages, in agreement with the ordinary people of the place.”

The Pope’s authorization, Gisotti said, is “care to prevent these pilgrimages from being interpreted as an authentication of known events, which still require examination by the Church. Therefore,  care must be taken to avoid creating confusion or ambiguity from the doctrinal point of view regarding such pilgrimages. This also concerns pastors of every order and level who intend to go to Medjugorje and celebrate or concelebrate there even in a solemn way.”

According to various sources, more than 40 million people from all faiths, including many people with illnesses and problems, have gone on pilgrimage to Medjugorje, a small town in Bosnia-Herzegovina, since the first apparitions were said to have taken place there in 1981. Indeed, today more pilgrims go there than to Lourdes, the famous Marian shrine in France, although Fatima still continues to draw the same numbers as before the Medjugorje phenomenon. The fruits of Medjugorje are a phenomenal number of conversions; physical, emotional, and spiritual healings, and vocations to the priesthood and religious life. Medjugorje has become known as the world’s confessional.

Andrea Tornielli, the editor-in-chief of Vatican News, in an editorial published today recalled “the long lines of people going to confession, and the Eucharistic adorations in the evenings at Medjugorje” as evidence of the spiritual impact of these pilgrimages. He recalled that in 2013, Pope Francis told Fr. Alexandre Awi Mello, a Mariologist and the Secretary of dicastery for the Laity, Family and life: “I believe that there is grace in Medjugorje. One cannot deny that. People are converted.” At the same time, Tornielli said, the Pope “put people on their guard against the protagonism of the seers and the multiplication of messages and secrets” but “he has never discounted the positive fruits of the experience of pilgrimages.”

Click on the links below for books of phenomenal conversion stories of people whose lives have changed completely, who have been rescued from the ashes through Medjugorje and become true disciples and priests of the Church.

OF MEN AND MARY: HOW SIX MEN WON THE GREATEST BATTLE OF THEIR LIVES

FULL OF GRACE: MIRACULOUS STORIES OF HEALING AND CONVERSION THROUGH MARY’S INTERCESSION