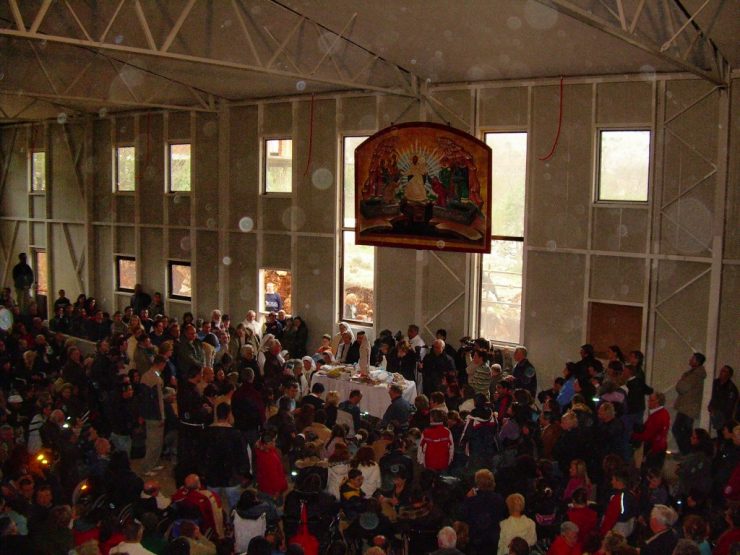 Below are a series of amazing photographs that my friend, Ana, took on our pilgrimage to Medjugorje in 2007. Several of us took pictures on the trip, and we noticed an interesting phenomenon. Whereas never before had our cameras given us pictures with with any white translucent circles on them, suddenly in Medjugorje these “orbs” were showing up in our pictures.

At first I thought my lens had dust on it, and so I cleaned it, but the orbs kept showing up. Not looking closely at my digital pictures with orbs, and considering them defective, I deleted mine. Thankfully, my friends had a keener eye than I and kept theirs, saying to me, “I don’t think this is dust at all. These orbs are showing up especially during Mass in the church and during Mary’s apparition!” We started to look closer and zoomed in on the larger orbs, which seemed to have a 3-d texture to them, as if something was inside of them.

Curious, we asked one another: “Angels? Saints? Who’s coming to Mass with us, and who is visiting us, along with Mary?” Our faith tells us that an unseen world of heavenly hosts accompanies such sacred moments, and perhaps God wanted to “see” our heavenly friends.

Ana’s photographs were taken before and during the visionary Mirjana’s monthly apparition, which took place in a building located in the Cenacolo community in Medjugorje.

In the following two pictures, Mirjana has not yet arrived, and Ana is near where the visionary will soon come to kneel and pray the rosary before Mary appears to her. You’ll notice a few people with severe handicaps sitting in a semicircle. The handicapped are always given a place at the front of the crowd when possible. When the apparition first began, these precious souls in wheelchairs began to cry with a sound of ecstatic joy and surprise, while everyone else remained silent. They seemed to collectively sense something, at the exact same time, when there was no way they could have known by any external sense the exact moment when Mary appeared, for people were surrounding Mirjana at that point. And when the apparition ended, they began to wail, collectively, exactly at the same time. I was seated just next to them and marvelled at their synchronized reactions. What had they experienced? I wondered.

In this photo, you can see the people in wheelchairs, and notice that there are few orbs. At this time, people are singing songs to Jesus and Mary. 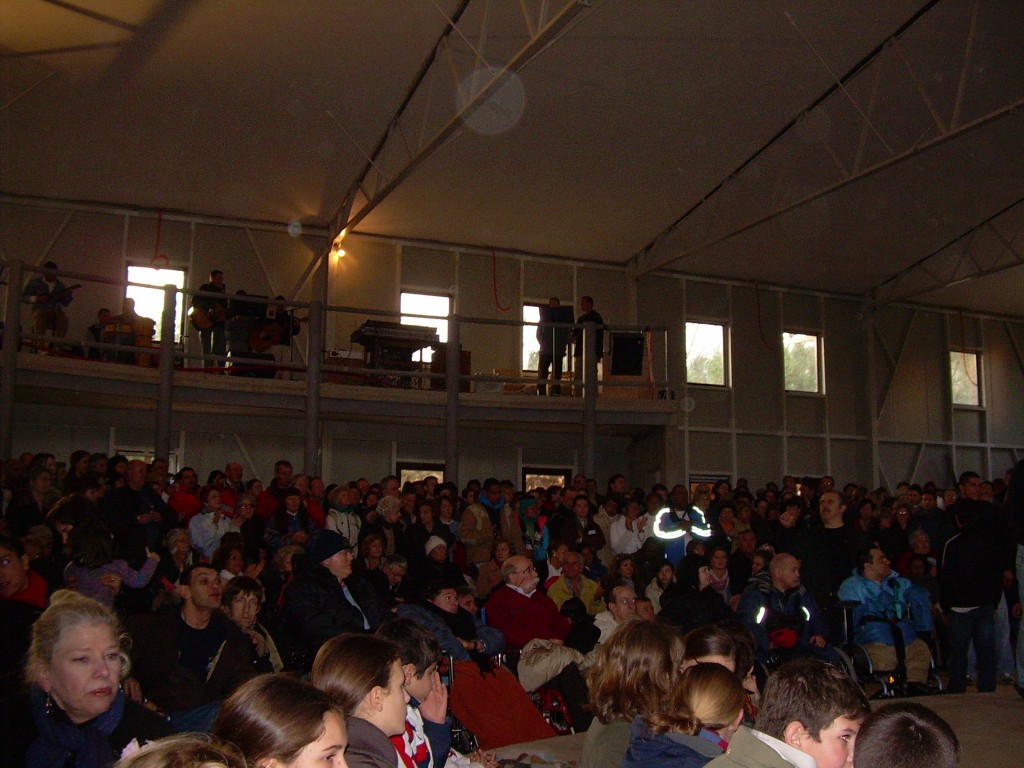 In the following photos, Ana has moved to the balcony. People are singing and awaiting Mirjana’s (and in particular, Mary’s) arrival: 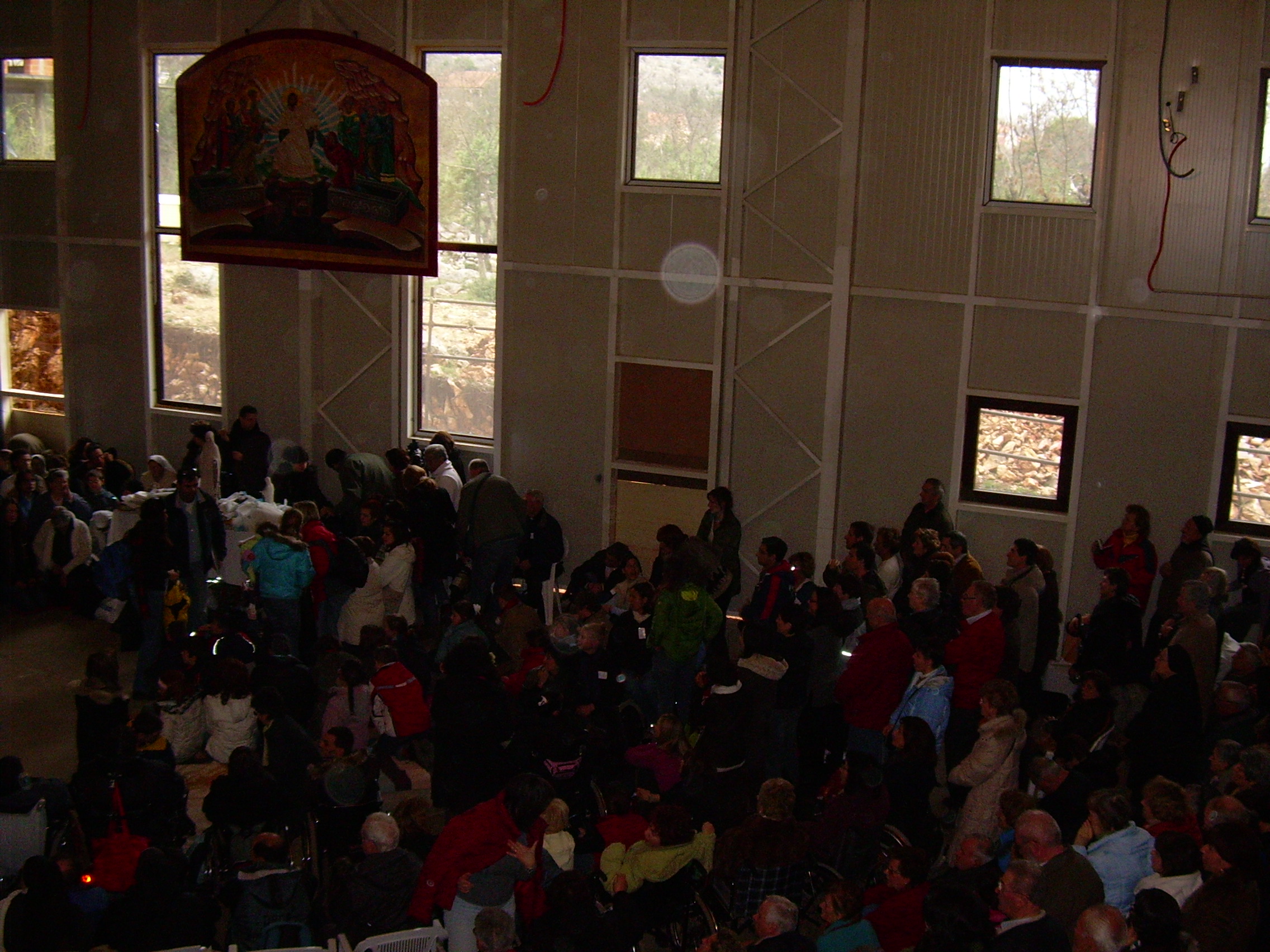 Mirjana has now arrived and is kneeling before a statue of Mary and bowing her head in silent prayer: 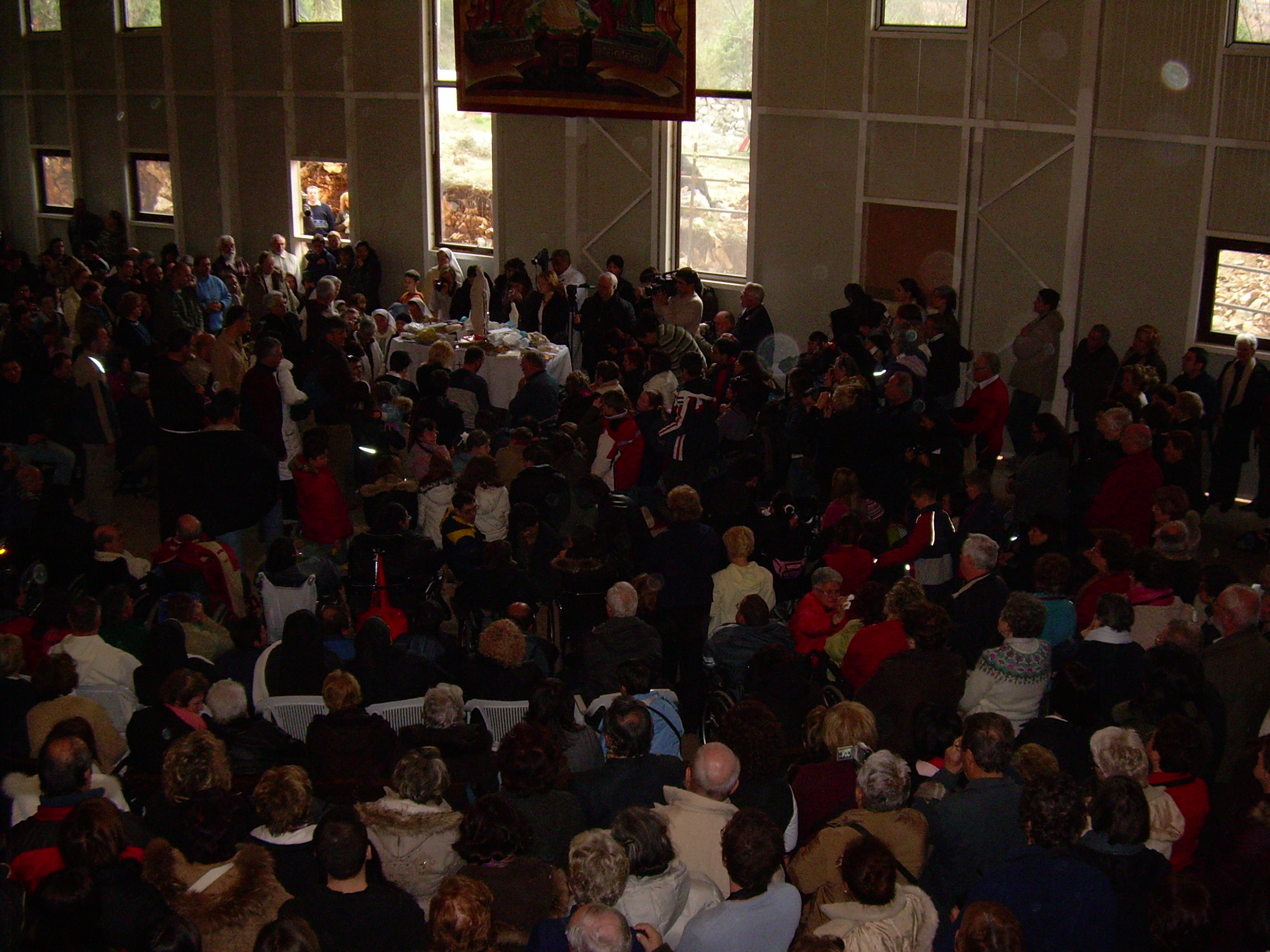 The crowd begins praying the rosary aloud, and more orbs start to come in all at once: 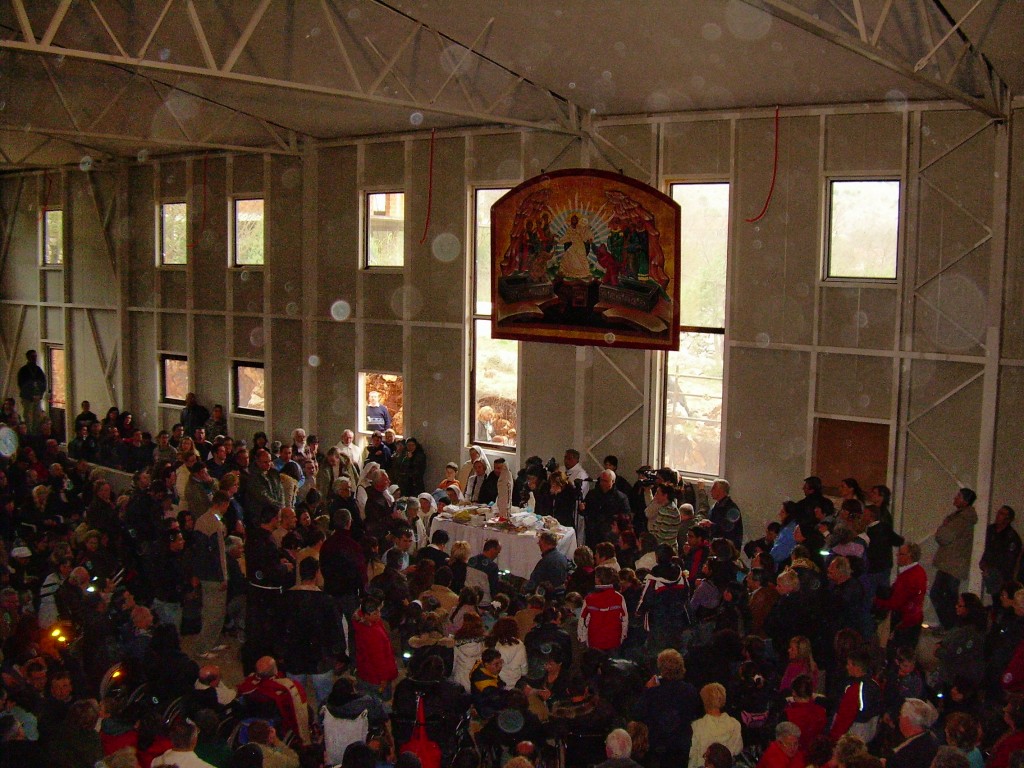 I was sitting with my family just four feet from Mirjana, with her husband Marco on her right. Suddenly in the middle of reciting the rosary, she lifted her head upwards abruptly, with her eyes gazed at a fixed point, and began nodding and crying–her lips responding with no sound to what she was seeing and hearing: 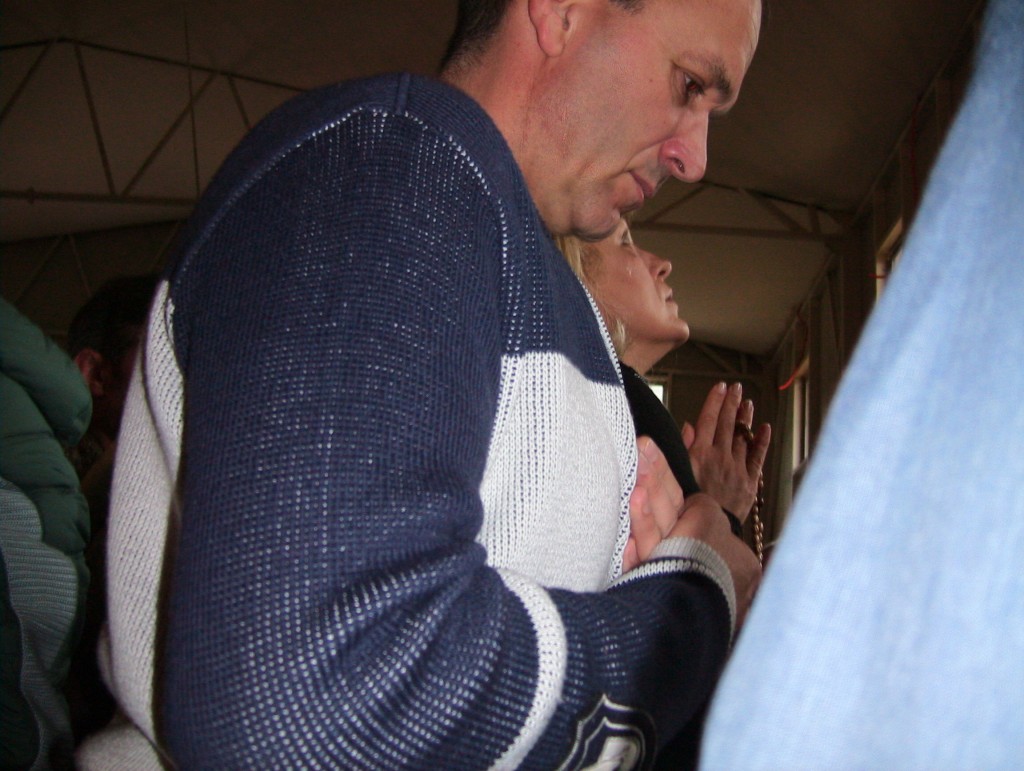 When Mary appeared, Ana was in the balcony and took a picture. The atmosphere is filled with orbs, most likely heavenly hosts! And a beautiful peace came upon us: 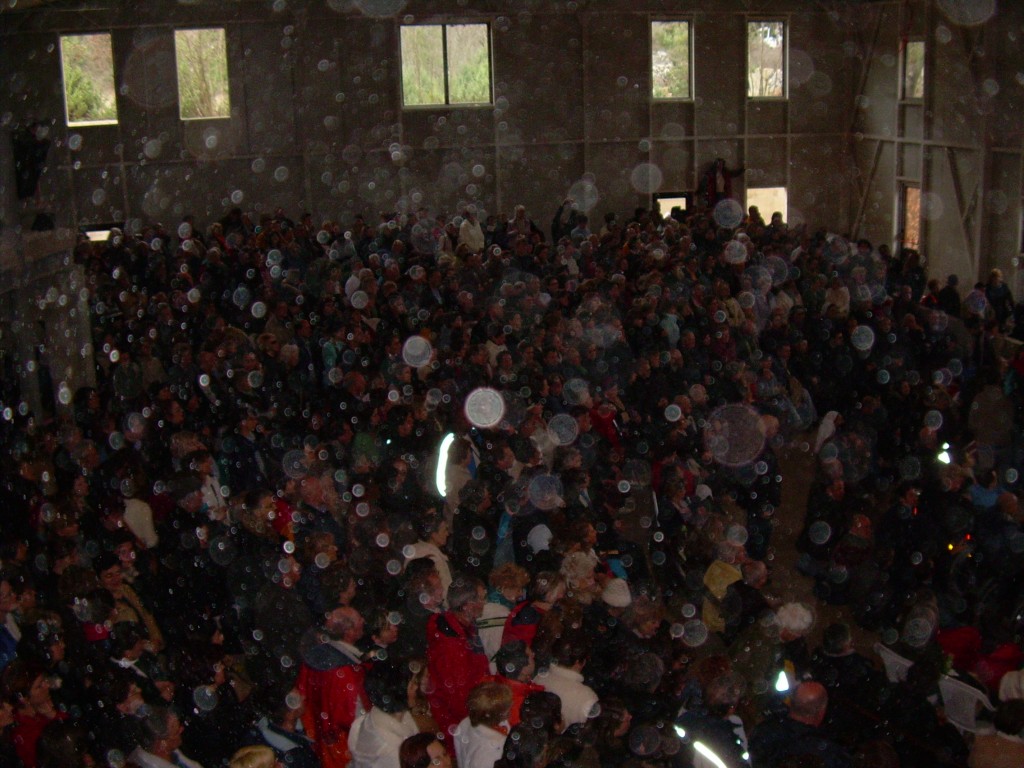 When the apparition ended, Mirjana looked bereft. She told our pilgrimage group that being with Mary is like being in heaven, and coming back to earth is an extremely difficult transition for her: 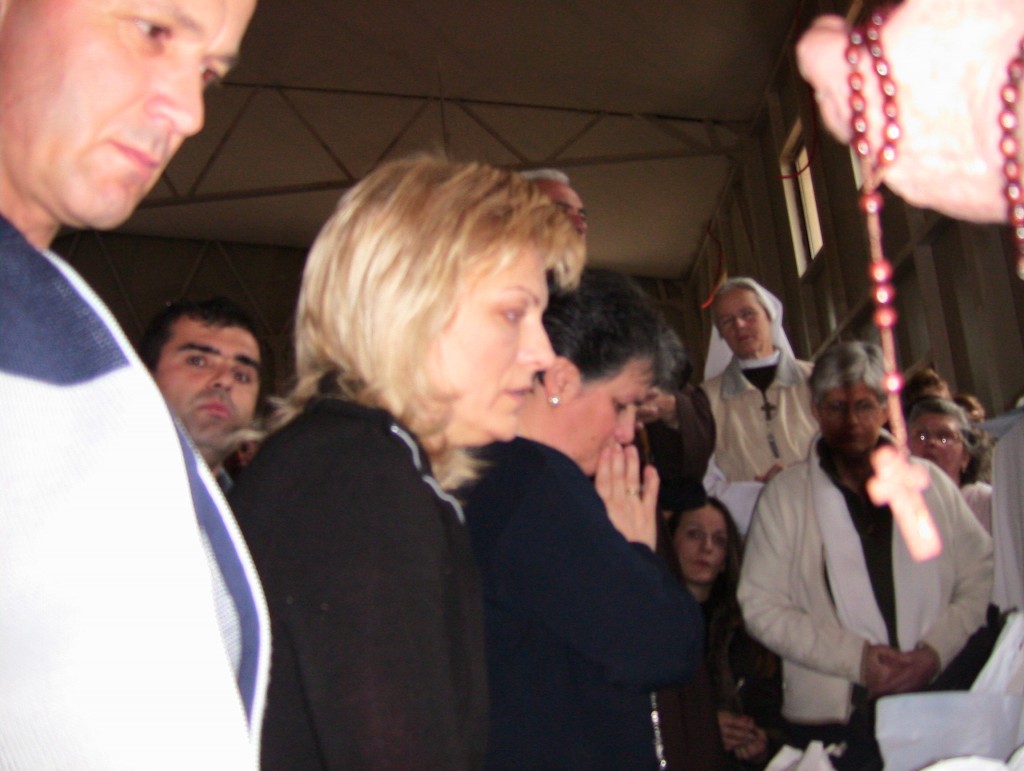 With a trembling hand and wiping away tears, Mirjana began to write down the message Mary had dictated to her. Every word imprints itself upon her mind, she told us, so that she can remember the words easily. 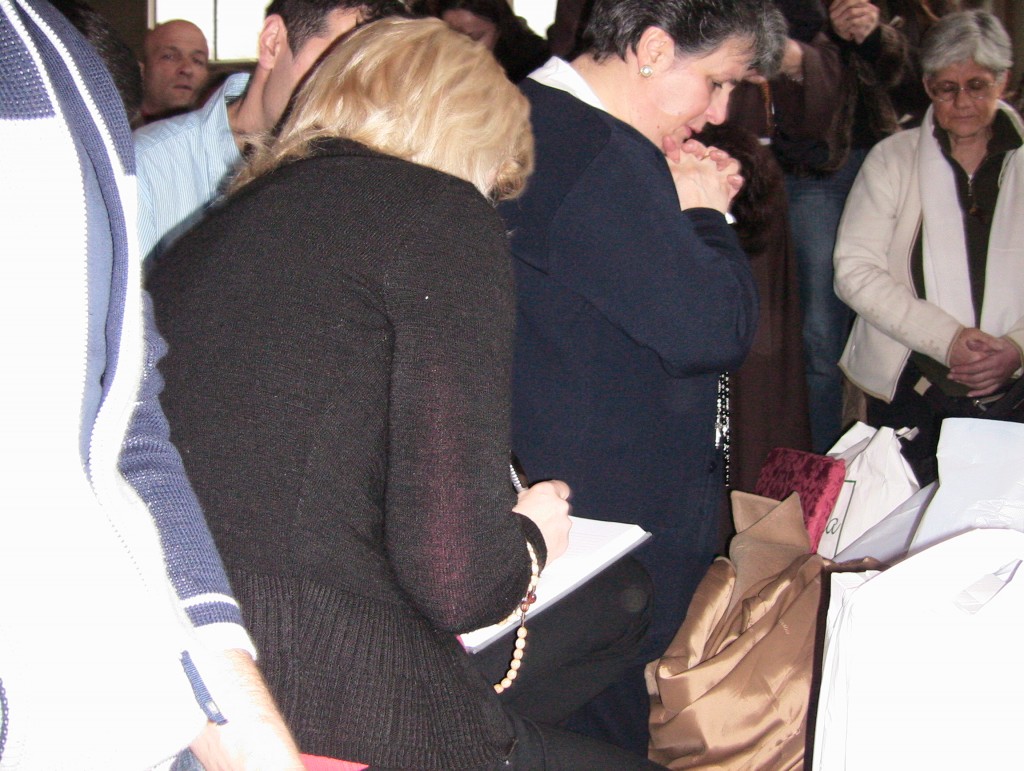 Here is the message that Mary gave us and the world that day, on March 2nd, 2007. It was translated quickly for us by Miki Musa, our guide, in the best English he could give:

Mirjana introduced the message by remarking, “Our Lady was decisive. She said”:

Today I will speak to you about what you have forgotten. Dear children! My name is love. That I am with you for so much of your time is love, because the Great Love sends me. I am asking the same of you. I am asking for love in your families. I am asking that you recognize love in your brother. Only in this way, through love, will you see the face of the Great Love. May fasting and prayer be your guiding star. Open your hearts to love, namely, to salvation.