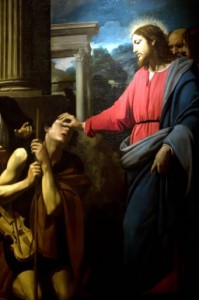 Miraculous healing of the eyes in Medjugorje - October, 2010

On October 16, 2010, a party of forty-six pilgrims from Switzerland gathered to board a bus to Medjugorje. Among the travelers was a blind woman Joëlle and her twelve-year-old daughter, Vinciane. They were accompanied by Claudia, a family friend.

The journey to Medjugorje did not go well. It took two days for the group to arrive at a border crossing into Bosnia Herzegovina, only to discover that the Swiss bus did not have the correct documents to travel into the country. The bus and the group moved on and tried another border crossing, but was met with the same decision by officials. The bus was not allowed to drive into Bosnia Herzegovina. 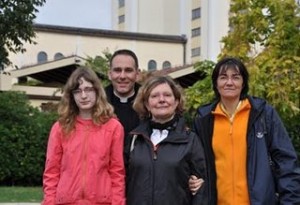 Joëlle (center) and daughter in Medjugorje

Fortunately, at the second crossing it was noticed that there was a local bus service operating a route to Medjugorje. So the party unloaded its luggage from the Swiss bus and waited at the stand for the next bus to arrive that would take them to Medjugorje. They finally reached the village that evening at 8.00pm.

The next day the group climbed Apparition Hill, including the blind woman, Joëlle. It wasn’t an easy climb in the rain, but there was a great spirit of solidarity. Later in the evening, the group gathered again and attended the evening prayer program at St James’ Church. Joëlle became strangely unsettled after receiving the Eucharist at Mass but was put at ease by the pastor accompanying the Swiss group.

The following day, most of the group climbed Mt. Krizevac, but Joëlle and a few others, including the pastor, prayed, instead, at the Way of the Cross, which surrounds the statue of the Risen Christ. The main group on Krizevac prayed earnestly for the needs of Joëlle and in the hope that she might recover her sight. Six hours later they came off the mountain in time to attend evening Mass at St James.

It was during this Mass that something remarkable happened. At the distribution of the Eucharist, Joëlle raised her head and saw in front of her a priest wearing a white alb. She looked up and was able to see the lights in the church, its high ceiling and windows. The shock to Joëlle was so great that she started to feel unwell again and asked her friend to take her outside. When Joëlle made her exit she turned to Claudia and said, “I see the light!”

They continued walking around the outside of the church towards the sacristy area and met with Fr. Oliver, a priest who had also traveled with the group to Medjugorje. When he was told what had happened, he was deeply moved and immediately returned inside the church to pray the Glorious Mysteries of the rosary, as is customary after the evening Mass in Medjugorje.

By then others had started to gather around Joëlle and Claudia. Fr. Oliver returned and then suggested they all go back inside the church in thanksgiving. The group knelt at the foot of the steps to the altar to give thanks and praise for Joëlle’s wonderful healing, and were reminded of the Gospel passage when ten lepers were healed, but only one returned to give thanks.

Then the group moved over to the statue of Our Lady and continued praying before finally returning to their hostel.

Afterwards some pilgrims told of how they were placed behind Joëlle when she received Communion, and how they had experienced such a strong smell of roses at the time.

Fr. Oliver had run ahead of the group back to the hostel and had invited everyone to come together in the main room because he had some good news to share. When Joëlle and Claudia eventually arrived back, the whole group was waiting for them.

Now throughout this healing experience, Joëlle’s daughter, Vinciane, had not been with her, but when her mother returned to the hostel, Vinciane was waiting with the rest of the group, not knowing what had happened.

Joëlle then said to her daughter, “Vinciane, you have washed your hair?”

Her daughter responded, “Yes, yes, but why have we been asked to gather in this room?”

Her mother asked another question: “You see nothing strange about me?”

“Then look again!” said her mother.

“You can see!” exclaimed her astonished daughter. The two clasped and hugged each other in joy for five minutes. One can only imagine the emotion felt by mother and daughter and all around them at that time. And the praise and thanksgiving continued until the group decided to visit and pray at the Blue Cross, the place of so many of Our Lady’s apparitions.

A final word from Joëlle: “This healing has given me the body of an adult, but left me with the heart of a child.”