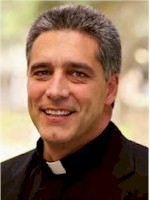 The following is an interview with Fr. Mark Beard, a newly ordained priest from Baton Rouge, Louisiana, whose life changed radically on a trip to Medjugorje. His conversion began when he traveled there as an angry skeptic, intending to disprove these visionaries who must have been getting some big money out of the whole deal . . .

King David went to the hills of Judah and said, “How is it that the Ark of the Covenant came to me?” And he danced for joy. One thousand years later, Mary came to the hills of Judah, where her cousin Elizabeth exclaimed, “How is that the Mother of Our Lord has come to me?” And John the Baptist leapt for joy in Elizabeth’s womb. That’s the Mary I now know—the archetype of our Church, the holy tabernacle that carried God Himself into the world.

But just a few years ago, I did not know Mary. So when I heard that she was appearing in Medjugorje, I didn’t want to believe it. God had sent prophets, disciples, and His only Son! So why would He be sending His mother?

At that time, my father saw me going down a path he feared I would not recover from. I was young, in my 30s, bullet-proof, and liked money, power, and “dating”—the unholy Trinity. I did avoid drugs or alcohol, but that’s because I was too busy chasing women.

My father, a powerhouse of a man, designed water plants for cities and started several companies. He was chairman of the board, and I worked under him in the family business for twenty years, earning a sizable income, flying around the world, and coming home to a nice house, a maid, and a rag-top jeep.

One day, my father said to me, “It seems that Mary’s appearing in Medjugorje. Go check it out.”

“What!?” I thought. We have litigation to deal with, jobs we’re trying to get started overseas, and you’re telling me to travel halfway around the world to check out some visionaries? Yeah, that’s what I’m gonna do. My father has lost it,” I thought. “How am I going to hide this from the shareholders, the board of directors—from my mother?”

Then I talked to my buddy John about what my dad was asking, and he said, “You should get the book, Queen of the Cosmos.” I read the whole thing while standing up in a bookstore. I couldn’t put it down.

I thought, “I’ve got to research who these visionaries are. THE Blessed Mother? I mean really. She’s talking to people on Earth? Come on, now. The whole thing struck me really hard. “Ain’t no way it’s happening. Ain’t no way.”

Yet something Jacov said in that book— about how Mary told him gently that she wasn’t happy with the way he was acting at school—nagged at me. “She’s watching?” I wondered. “She knows? If she’s aware and she knows what we’re doing, that means HE must know. Then I’m accountable for my actions . . . and I might not settle up with Him too well at the end of time!”

I thought Ben Franklin was right: God helps those who help themselves. I did my job. I figured people could worship trees and still do their job, and if they did their job right, then whatever religion they had was good enough, and all that was expected.

I was an obligatory Catholic. I’d show up for Mass, and if the priest didn’t bore me, I’d stay. I figured I hadn’t killed anybody, so I was a good enough person. I confessed my sins directly to God, a forgiving God. No need for the Sacrament of Reconciliation. And I didn’t believe in the Real Presence.

So I needed to go across the world to put this animal to bed. I needed to debunk the hubbub. Travel and money were no problem, since I’d been flying around the world for a long time due to business, so I quickly boarded a plane for Medjugorje. I ran into nothing but problems. It started when I got lost. I was supposed to meet up with my pilgrimage group in Paris, but they had already left. Don’t ask me how I ended up in Germany, but when I was there in the airport, I decided to go home. As soon as I stood up to leave, I saw a group of women wearing Mary pins. I knew that face on the pin. It was the face used to portray Mary of Medjugorje, like I’d seen in the Queen of the Cosmos book.

I was not in a good mood on this trip and was “making friends” wherever I went. I figured I made a LOT of money, so I was IMPORTANT, so I deserved to have a BIG chip on my shoulder. The people in this group finally realized I was safe to talk to, and one woman in the group said, “You don’t really believe what’s going on in Medjugorje, do you?”

“Lucifer picks one to make sure there are trials and tribulations.”

When I finally arrived in Medjugorje—at midnight, after untold delays, problems, and missed connections—all I had was the name of a person in the town. I didn’t know anyone, didn’t know the language, couldn’t sleep, didn’t have my luggage since it had been lost along the way, and I was there to meet six people who thought they were seeing the Blessed Virgin Mary. I probably could have lit up the entire town with my anxiety.

I sat down with my new “faux” pilgrimage group at the pension where they were staying and started to eat some soup. I wanted to be left alone. Then someone said to me, “You need to sleep down the street.”

She took me in her car, stopped it several yards from my destination, and pointed to a house.

“Good,” I said, “Just drive your car right to that home.”

“No,” she said, “there are too many potholes.” So I got out of the car, and she took off. It was now 2 a.m. I started to laugh. “CNN would not believe this,” I thought. “Cajun Man from South Louisiana Ends Up Across the World Searching for Visionaries.’”

I walked up to the door of this unknown house and knocked on the door. A woman opened it, and I heard the most magical words: “You must be Mark Beard. Where have you been?”

The next person I met was the visionary Vicka. As I stood in the crowd of onlookers watching Vicka give her talk to pilgrims, a woman next to me said, “You don’t believe, do you? You’re like Thomas.”

I had to admit, though, that Vicka glowed. That woman was radiant. She described heaven, purgatory, and hell. I wanted to get the skinny on why she was doing what she was doing. Where was the book deal–the movie–the money? This must be a seven-digit deal, not a three- or four-digit one.

After Vicka’s talk, she said she would pray with everyone two by two. “Great . . . like Noah’s ark,” I thought. I wanted to catch her at her game. I figured she’d cut her losses by not praying over everyone because there wouldn’t be anything in it for her; after praying over a few people, she would have put on enough of a show. To test this, I got out of line and went to the very back. I started timing her as she prayed over each person—one minute, ten seconds; one minute, ten seconds, each time. She took a full hour to do this, and prayed for every single person who was waiting. When it was my turn, I looked at my watch the whole time—one minute, ten seconds.

The woman who’d talked to me earlier asked, “Do you believe now?”

“The jury is still out.”

“You need to meet Ivanka,” she said.

I left and scoured the town, talking to whomever would listen—cab drivers, restaurant owners, pilgrims—trying to punch holes in the charade, but I couldn’t get the goods from anyone about what was “really” going on.

By the time I met Ivanka, I had a plan. I’d memorized an interview of her in Queen of the Cosmos, in which she told the story of Mary appearing and showing her her mother, whom she was able to embrace. At one point in Ivanka’s talk, she asked if there were any questions. I decided to make a statement instead of ask a question: “I’m so sorry to hear about your mom passing away. I can’t even imagine what that must be like.” At this point everyone around me started backing away from me, probably thinking, “This man is going to die from insolence, and we don’t want to die with him.”

Then I started to reiterate what I’d read in the book, but changing slightly a couple facts here and there, and adding a few nuances, trying to catch her in a lie— because if I caught her in a lie, then I would prove that the whole thing was a sham. Coming to a close, I ended my speech with, “I just want to thank you for sharing that with us.”

Ivanka responded, which took several minutes, and then the translator began to speak in English. Ivanka had corrected every misstatement, every false innuendo, every supposition I had made—and she did so like a mother to a child.

“Oh my God,” I thought. “That woman is telling the truth.”

I went to a pay phone and called my father. “Chief,” I said to him, they’re telling the truth. They’re living it. The whole town is living it. If they were lying, they’d be giving up their children’s inheritance, their children’s future . . . because if they were making this all up and someone found out, the whole town would consider them anathema, and they’d be left all alone. The risk is too great. There’s no money. No deal. No women. They’ve got nothing. Only God.

I went to Confession for the first time in years. And toward the end of the trip, I found myself sharing my heart with another pilgrim, an honest, kind, prayerful man–a former Protestant pastor, who had sacrificed a lot to become a Catholic. He said to me spontaneously, “There’s something I need to tell you.”

“Are you sure you’re not supposed to be a priest?”