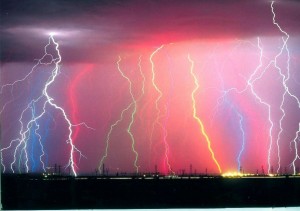 The first evening I was in Medjugorje, my tour group walked into the town church, Saint James, which was packed with people praying the rosary. I remember walking forward a ways down what was left of the center isle, feeling so much serenity, in the midst of all the hubbub and confusion of thousands of people converging to celebrate the anniversary of the apparitions. There, in that church, I felt the power of the Holy Spirit, fully present. Amidst a crowded situation, which should have been terribly chaotic, in a hot place where strangers sat packed together in the pews, while others came and went, all were blanketed with an incredibly profound spirit of peace. I am not very charismatic, but when I walked into Saint James Church, I dropped to my knees and stayed on them, overwhelmed for a very long time. 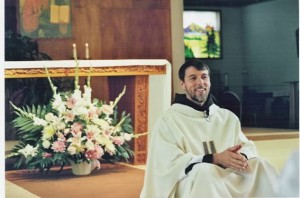 It became clear to me during my week in Medjugorje that Mary was appearing there. Twice, she appeared to a visionary in a public apparition, and when this happened, I was near the apparition site on Apparition Hill and again felt a divine peace mixed with a collective excitement. I also saw two miraculous phenomena on two other days of our stay. One afternoon, I could look right at the sun—without squinting, with my eyes fully open and my face completely relaxed. People who had described this Medjugorje occurrence to me generally talked about seeing the sun spinning, but to me it looked more like a vibrating, even bobbling, illuminated, glowing host. When this happened, my friend Caren and I were walking along a road with several other groups of people, and I found it interesting that some of us could see it, and some of us could not. Caren could not even look up at the sun because it was so bright, and I consider her a more fervent Christian than myself. This did not ruin her day, though, because she could sense the excitement in the group; people were pointing to the sky and excitedly commenting to one another about the miracle. I looked at the sun for several seconds and looked away a couple of times, but every time I looked back, it was still bobbling. I stared comfortably into that host-like sun for a long time and didn’t go blind. I still have 20/20 vision.

On our last night there, Mary again appeared on Apparition Hill. I did not go up the hill with many of the other pilgrims to be near the apparition site. Instead, I stayed inside. At the time of the apparition, a lightning storm struck which I could view from the balcony where I was staying. I decided to run outside to better see the storm, and when I looked up, I witnessed lightning coming down in many different colors, blue, green, purple, yellow, red, all over the sky—an amazing and incredibly beautiful sight. Something miraculous was obviously happening, although it looked natural, i.e. it was supernatural but not bizarre. But of course the real miracle was Mary’s appearance and God’s abiding presence. The lightning, I felt, was merely God’s afterthought. With both the miracle of the sun and the lighting, I didn’t feel surprised. I remember thinking, “If Mary is really appearing here, then of course the universe is going to acknowledge that.”

For me, the most powerful sign of the authenticity of Mary’s presence and the Spirit at work in Medjugorje was the conversions that were happening. The conversion that most impressed me happened to a man I had met on the bus ride in. He was the successful businessman type, and he was only there because his wife had been keen on visiting Medjugorje and had connived him and their daughter into accompanying her. During the bus trip he had spent his time rolling his eyes, pooh-poohing the whole thing, throwing doubtful glances at his wife, and questioning her sanity. Well, I ran into them some days later, and now the picture was reversed. His wife and daughter were looking at him with bemused wonder as he preached to anyone who would listen about how Mary had turned his life around and about the importance of prayer and repentance. He was on fire. He had experienced his personal Pentecost and could not stop sharing the Good News with everybody.

Read more stories, such as this, in Watkins’ book, Full of Grace: Miraculous Stories of Healing and Conversion through Mary’s Intercession.

Click here to read more about Fr. Gibbons and click here to support his Franciscan Mission in Russia.