I recently returned from a whirlwind two-day trip to Medjugorje with Trinity Pilgrimages, where the ABC News “Nightline” co-anchor, Bill Weir, interviewed me at the base of Cross Mountain, for a show called “The Miracle Mysteries,” to air Wednesday, July 13th, (NEW DATE AGAIN! The show has been postponed twice, due to the Casey Anthony trial), at 9pm in central and mountain time zones, and at 10pm in eastern and Pacific time zones. The hour-long program will explore the history, theology, and importance of the Blessed Virgin to Christians and even non-Christians throughout history. 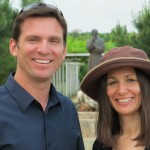 At twilight, on June 9th, while sitting amidst the jagged red rocks, which cover the mountainside, I shared my story of miraculous healing and conversion to Catholicism and my husband’s witness of a miracle at the top of Cross Mountain—all of which are covered at length in my book, Full of Grace. I then answered Bill Weir’s questions, such as, Why do we need Mary? Why did she come to Medjugorje? What do you think she looks like?

Once my interview was over, I happily entered into the grateful state of a pilgrim. That night, I chatted far too long about God with a delightful new friend and roommate, and early the next morning, climbed Apparition Hill with my large flock of pilgrims, including the show’s producer, Jenna Millman, cameraman, Rupert, and Nightline co-anchor, Bill Weir, who kindly assisted pilgrims up the jagged terrain. 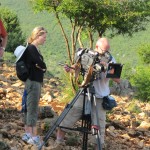 At the site w 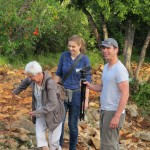 here Mary first appeared to the children, and where a beautiful white statue of her now stands, I prayed that Mary would intercede on behalf of all those who were praying for me and for the Nightline program about her. Mother Mary, please tend to their every need and deepest desires.

The next day, I visited a seminarian friend, who happened to be spending his summer, working at the “castle” in Medjugorje, a beautiful fantasy-like structure, built by the converts Patrick and Nancy Latta, who wanted to offer a refuge, a home away from home, for vowed religious and those seeking religious life in the Ch 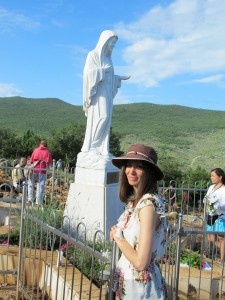 urch. Resting my back against the cool stone walls of their chapel, I gratefully escaped the noon summer heat to listen to Patrick tell his dramatic story. His was a life shattered by the pursuit and acquisition of money, transformed into a life of joyful service to Mary of Medjugorje, as a result of reading just one sentence of one of Mary’s Medjugorje messages: “I am calling you to conversion for the last time.”

At the end of Patrick’s sharing, a fellow pilgrim sitting next to me announced to me and Patrick, with emboldened joy, that I should write another book with his story in it, and then it should be turned into a movie with Robin Williams as the star. Anyone have his number? This should be no problem. 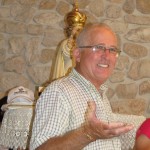 Moments later, back at the visionary Mirjana’s pension where we were staying, I listened to author Michael Brown, a major attraction of this pilgrimage, give a compelling talk to our group regarding Medjugorje, which referred to what we do and don’t know about the secrets, and what we are called to do to prepare ourselves spiritually for what lies ahead. We will revisit our own lives one day, he reminded us, and we will see through God’s eyes how our actions, even our thoughts, affected the world around us. Wouldn’t it be a joy to review a life well-spent and full of love? It is best to convert our hearts now, for we can always begin to live a new life today, a life we’d be proud to rewind and replay.

I recently learned that a couple days after I had to leave (due to my two small children awaiting me at home), almost the entire pilgrimage group saw the miracle of the sun, while atop Cross Mountain. Miracles abound in this special pilgrimage site on earth, but not one rosary turned gold, or one sun caught spinning in the sky, compares in value to the invisible miracles of healing rushing through human hearts. 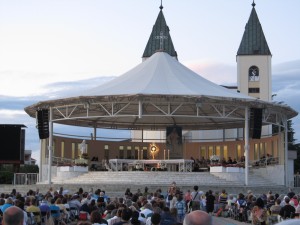 What a gift is was for me to be back in Mary’s lap. I’d forgotten how incredible the peace can be in Medjugorje. But I was reminded, as my last day as a pilgrim came to a close. When I was at adoration, amidst a sea of people, outside on a warm summer night, behind St. James Church, with silent lightning flashing in the sky, what I felt inside was a mixture of peace with a quiet ecstasy and joy—it had a heavenly sweetness to it, which I’ve never felt anywhere else. It was hard to come home.

By Christine Watkins, author of Full of Grace: Miraculous Stories of Healing and Conversion through Mary’s Intercession