“I could feel my veins vibrating with the intensity of peace that I was experiencing. If anyone had spoken to me at that moment, I would not have heard them. I knew immediately that the presence I was feeling was Mary.” 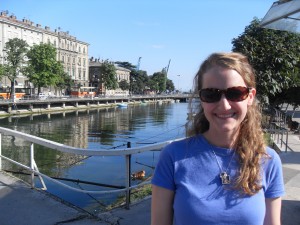 I went to Medugorje with an open heart, but not completely sure of the apparitions. As the trip began, I looked around with a discerning heart asking God for guidance, and I believe He came through. By the end of the trip, I was convinced that Mary is indeed appearing in Medugorje.

When we arrived, most of my family was stunned by the literally thousands of pilgrims in the small town, who came for the Youth Conference. There were over 50,000 people there for the week-long festival, and it was difficult to weave between so many people to make it from one place to another. But underneath the chaos, I felt a peace in the town that was stronger than the temporary havoc. At one moment of struggle with the crowds, my heart cried out to Mary for help and I felt her say, “Jesus is in your heart. He always is. Find Him.” I immediately felt a sort of vibrating core inside of me, and I placed my mind and my heart there. I will never forget that moment of peace and a subsequent experience I will share that was so much more peaceful than it would have been because I was holding on to the King of Peace inside of me.

The first afternoon we listened to several testimonies from priests and religious, and I was particularly moved by the talk by Sister Elvira Petrozzi, the founder of the Cenacolo Community in Medjugorje, an oasis for addicts and all those who have sought meaning in the illusory things of this world and lost their happiness and sense of identity in the process. Her spirit was full of joy. She jumped around the stage calling out to everyone, telling them that the most important thing is to always smile. Her joy was contagious and pretty soon the whole crowd was singing and dancing along with this 80-something-year-old woman. 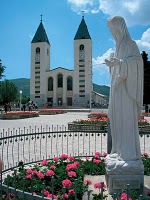 Later that afternoon we went to hear two of the visionaries, Ivan and Marija speak to the pilgrims. I was especially moved by Ivan’s talk. He began by urging all of us to pray for the visionaries. “We are ordinary people,” he said, “trying our best to be holy. But just as it is hard for you, it is hard for us as well.” With that introduction, he spent the rest of the talk focusing on the messages of Mary, particularly that of peace. As I listened to him, I could feel an actual peace that came from his voice. It was as if by seeing the Queen of Peace, he was better able to communicate peace to us, even in the manner in which he spoke to the crowd. As I left the park, I considered what the visionaries would act like if the apparitions were a farce. Would they be peaceful? Would they be prayerful people? Humble? No. I could sense their genuineness, and I was impressed by the focus of everything they said. It was all about Mary and Jesus. Nothing was about them or their personal opinion.

That evening my whole family went to Mass, and I was struck by a thought that kept coming back to me throughout the trip–The biggest miracle I will ever see on this Earth is the miracle of the Eucharist. It exceeds even the Virgin Mary appearing to me in person–not that it has happened! Miki, our guide, told us that all miracles are intended to bring us closer to Jesus in the form of the Eucharist, and this became so true for me during this trip. Even Mary makes this clear in her apparitions. She frequently gives a motherly blessing to those whom she appears to, but she makes it clear that her blessing is not the same as getting the blessing of Jesus through any priest. She also, at one point, told all of the visionaries that if they had a choice between coming to see her and going to Mass, they should choose the Mass.

The focus of the messages also convinced me of their veracity. Mary gives very simple messages. Just as David slew Goliath with five small stones, she encourages us to use five weapons against evil: Pray, Fast, Go to Confession, Read the Bible, Go to Mass to receive the Eucharist.

One of the last days we were in Medugorje we all met with the visionary Mirjana. Immediately I could sense a kind of holiness that I really admire, a holiness that is similar to one of my favorite saints, Padre Pio. She was very intuitive, and I could tell she could immediately sense what was in my heart. She was kind, but I knew she would not hesitate to tell me, through her eyes or her words, the truth, even if it hurt my ego. This is a charity that we often do not appreciate because it can cause us to feel bad about our faults. But it is one that does not judge but rather urges us closer to Jesus.

She answered many questions, but the thing that stuck most in my mind was her urging to love and to love always. She kept saying, “Do not judge. This is how we can love. Do not judge.” And this message is one that I think really hits at the core of what love is. Love is not kindness at all times. But even if our love requires us to say or do something that might hurt another, it is always done in charity and without judgment. This is very difficult to do.

I was also impressed by her answer to my question about how she deals with high expectations that result from being a visionary. She immediately said, “I feel sorry for anyone who focuses on me, and I pray for them. I am not what should be focused on, but rather the message of our Lady is what is most important. I am not important.”

She responded to all of our questions with an almost unnerving directness and humility that really left me with a sense of peace. After leaving my conversation with her, I told my sister Elizabeth, “I was not sure about this when I came, but I am sure now. I believe in Medugorje.”

I did not need the final experience that I am going to share to be convinced of the apparitions, but I will be eternally grateful to God for the blessing of the final night we spent in Medugorje. My family climbed Apparition Hill, where Mary first appeared to the visionaries, in order to be near an apparition that was going to happen to the visionary Ivan. I did not expect to be present for an actual apparition, and I was excited but also nervous. I was afraid that if I did not feel anything, I might walk away doubting again, but I am glad that God did not test my faith. Instead He allowed me to feel the presence of His mother in a very strong way.

As we waited for 10PM, the hour she was going to appear, several things happened to cause unrest among the crowd. First a woman came up the hill guided by two other people, and she was screaming at the top of her lungs. Her scream did not sound human. It was haunting and gave me chills. My friend Erin explained to me that this might happen, that people who are unwell spiritually or mentally are often brought to Medugorje for healing. But even though I knew what was happening, it gave me a very sick feeling inside. After her screams died down, a group of pilgrims came pushing through the crowd and inserted themselves directly in front of us, blocking our view of Ivan and the statue of Mary. My family immediately protested, but the people in front of us remained in their hardened wall, completely surrounding us. I knew that the hour was approaching, so I closed my eyes and begged God to take these negative feelings away, so that I could peacefully experience whatever it was that He wanted me to experience.

A few moments later I experienced the presence of Mary. The feeling I felt did not creep up on me or gradually enter my heart, it came upon my like a tidal wave of peace and love. I could feel my veins vibrating with the intensity of peace that I was experiencing. If anyone had spoken to me at that moment, I would not have heard them. I knew immediately that the presence I was feeling was Mary. There was something in her spirit that connected with mine, a kind of femininity that I never had sensed before in the spirit of God. I immediately gave her all of my concerns and the deepest longings of my heart.

She could hear that my deepest love was for my family, and she said to me, “Hope. Hope. Always have hope.” I then saw Mary in my mind with her mantle around my family guiding them from their earliest years. I felt that she was saying to me that she has always been protecting my family, as a mother, and always will. I felt her say to me that I feel love for my family, but my human love will never compare with the love that our Heavenly Mother feels for them. I then received for the first time a very tangible feeling of what her motherly love is like. It was deep and intense and like nothing I had ever felt before. It was a perfect love. A love that is like the best aspects of a human mother’s love, but much deeper and more powerful. When the intensity of the experience faded, I was left with a joy and strength that I had never felt before.

I cannot explain how I am different now after my trip to Medugorje. I think I will never really know until I get to Heaven what happened in my soul over those four short days. But I am thankful to my Heavenly Mother for her love and for allowing me to experience what happened in my heart during that time. As I prepare to enter an order of sisters as a postulant, I pray that she will continue to guide me in order to follow Christ with my entire heart and to “do whatever He tells me.”